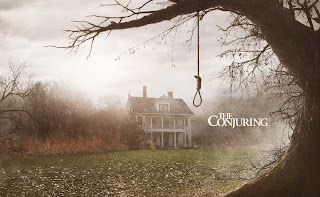 What are they about?

Both movies center around the figures of the Warrens, who are real life ghost hunters.  Each movie tackles at least one of the 'real life' cases they investigated and what they encountered, with a bit of cinematic flair.

Like most people I became familiar with the Warrens through the Amnityville Horror movies.  I was reintroduced to them several times through my various adventures into stories of ghost hunters and paranormal things. 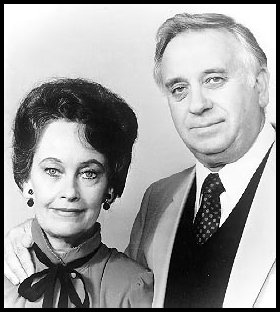 Across all of this, there's very different views of the Warrens.  Some people love them, some people owe them their lives, some people hate them and on and on.  Either way, they are some of the most interesting people out there when you look into paranormal things.

With that in mind, I actually love the idea of them being part of this cinematic universe and I'm very much enjoying seeing it grow across several movies.

The first Conjuring introduces us to Ed and Lorraine Warren in the context of not the Amnityville Horror, but rather another haunted house that is supposed to be possessed by the spirit of a dead witch who is terrorizing the family.

In this movie we have all the normal trappings of a paranormal hunt however with two very distinct differences.  For one they keep the movie in the correct time period - the 70's.  So there's a well done nostalgic feel that keeps you rooted in the technology of then and how people may have reacted in that time.  The second is that there's no found footage.  James Wan (the director) has wisely decided to ignore the cliche gimick of shaky cam and instead focus on scaring the bejezus out of us in other ways, and it's effective. 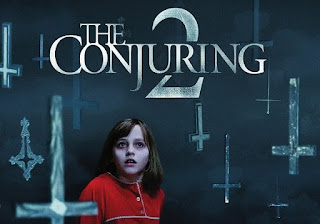 The second movie, Conjuring 2, explores another slightly more well known case with the Warrens
known as The Einfield Haunting.  Again we're presented with a large family who has to deal with a demon in their house, with it's own intentions.  And since this one takes place in England, the Warrens have their hands tied with what they can and can't do.

Oddly, both of these movies manage to duplicate the feeling that I always loved about X-Files, the tv show, and my little paranormal fangirl.  You, as the viewer, are presented with the tale of a demon and how a family copes with it.  Yes, it could be fake, and the Warrens take you for a ride to slowly delve into proving it so that they can perform an exorcism.  In the end they become kind of the heroes of the franchise without any huge display of powers.  They just happen to know about the paranormal.

With reguard to powers, there is a caviate.  Yes, Lorraine Warren is shown to have psychic powers.  However, she's never really shown to control them.  Rather she's just a party to what they show her and then relays the message.  She doesn't summon up the demons or powers at will, they just either are or aren't there. 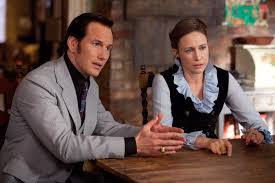 Beyond these two movies, there's a host of spinoffs that have either been released or are on the way.  From Annabelle, to the Nun and hopefully many others, we get to see other cases that the Warrens have had some part in. And as someone who loves a good ghost story, I love seeing how these all intermingle with each other.

Now, yes, I have reviewed another movie about The Enfield Haunting and I've linked it.  Also, through my reading and websurfing, I know that these movies take quite a few artistic liberties.  For example, the real Annabelle looks more like Raggity Ann then some chipped and creepy porcelain doll.  And The Enfield Haunting has it's own controversies with how the Warrens were tied into it.  Weirdly the controversies add their own layer to watching the movies and guarantee me hours of further reading to hear all the sides and come to my own conclusions, like any good ghost story should, so I don't mind the artistic liberties.  It just means that I have a lot of reading ahead of me to learn the real story and what actually happened.  It's like a really good cinematic teaser.

I honestly like both of these movies for what they are and that's a good scary ride.  It doesn't matter to me if they're true or not, but the fact that their based in a thread of truth runs just the right line to make it good.  That plus the style of James Wan and the great actors and actresses makes for a fun ride.  I'm very much looking forward to checking out many of the spin offs, soon as I find them on a streaming service I subscribe to.

Where did I watch it?

HBO Go streaming service.
Posted by SnowTigra at 6:18 AM