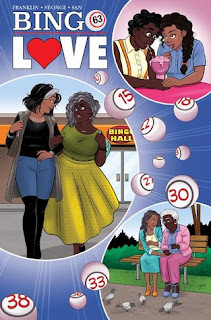 
Hazel and Mari met at church bingo one night and in that moment started a friendship and love that went against their times and parents' beliefs.  Sadly, it never happened. Least not until history repeated itself and they met again at the bingo parlor many years later.

In the world of queer stories, there's a lot of tropes and cliches that we're used to hearing, especially when it's dealing with the 'good ole days' when we weren't accepted (could go on about how that crap is still happening, but you get the point). While this comic isn't hugely new in that area, it does bring in diverse characters we're not used to seeing in these situations and is definitely worth reading for a cute story that gets you right in the feels.

The characters are sweet and easy to fall for, each drawn with their personality in mind and it shows! There wasn't anyone I disliked, and even those I got mad at throughout the story had their reasons and their reactions were justified. A good portion of this story feels so authetic and real, as if I were hearing it from someone who actually experienced it, and that adds to the comic in so many ways. Not only does it have great art but the writing is top notch!

The comic leaves you aching for more story, but not because anything is left out.  Instead the short narrative reemphasizes all the time the two didn't have together due to their parents and societial expectations and that hits hard. Keeping the story short doubles down on that feeling and makes it hit even closer to home. It's almost impossible not to root for these two ladies and their love, especially knowing how long it's taken them to get it. And it's one of those where I would love to read more, but there doesn't need to be more.  It's perfect at the length it is.


Pick up this comic.  Seriously.  Pick it up and share it with your friends.  We need more positive queer stories out there like this because it's so sweet. It's worth a read and a share, and probably a read again once you're done with those tissues.

Where can I get it?


We got ours through the official Kickstarter, but there are ways you can get it too!
Amazon Link: https://www.amazon.com/Bingo-Love-OGN-Tee-Franklin/dp/1534307508/

Also, ask your local comic book shop!  It comes out in February 2018, so go now and ask them to order it in!
Posted by SnowTigra at 8:07 AM No comments: