Momo Con in Georgia and Colossal Con in Ohio!

We're off to two cons in the next coming weekends!  If you're in the area, please stop by our table and check out our crafts, books and costumes!

Momo Con is first and it's in Atlanta, Georgia, from May 28th until June 1st.
We don't have a map, but you can find us in artist alley.

Colossal Con is in Sandusky, Ohio from June 4th until the 7th.
We'll be in artist alley, as usual, sadly no map was provided.

Exciting news!
Our dresses will be modeled in the Artist Alley Fashion Show at Colossal Con on Saturday.  I also have a brand new style of dress debuting just for this show!  Please stop by and enjoy!  After the show, you'll be able to find us in artist alley and I'll even be doing commissions for dress designs if you want to order your own to be made and sent to you after the con!
Posted by SnowTigra at 10:06 AM No comments:

Link to the event - if needed.

As an author with story ideas swirling in your head and muses whispering in your ears, there are many things you may want to write about. You have this idea for this great character who was weak, then kicked ass to rise to conquer the world and restore order. It can be tempting to use trauma as a quick way to explain your character's behavior or give them an interesting back story, but this is actually something that can destroy your story and alienate your audience.


In the world of fanfiction -- where I spent a good number of my writing years and practiced many of my writing skills -- this was especially prevalent.  I practiced how to write in the world of yaoi, where pairing male characters from anime series was common and the idea of one -- if not all -- of them being raped was a common plot device. I even fell victim to this in a few of my earlier fanfictions, having characters become victims without actually exploring their feelings about the situation and, instead, washing it away with a quick embrace and a few tacked on words of comfort. In a world full of shows that popularize the crime narrative and the superhero narrative of losing everything, it's easy to fall prey to this form.

Now I'm not saying to not use trauma in your story.  In fact, some of the best novels I've read have trauma and many people experience it in their real lives. Instead, here are some tips for how to write trauma sensibly

This is probably the most common sense of the tips, but it's one that can be the easiest to forget.  As an author, you're trying to create believable characters, so you want your characters’ experience to feel real and be relatable.  This is especially true for trauma.  I used rape as an example above, and while every reader certainly isn’t going to know what it’s like, you want them to feel like this is a horrifying experience.  Therefore, some research is required, especially if you don’t have experience with the trauma you’re approaching.

Now when I say “do your research,” I don't mean watch a bunch of Law and Order: SVU.  It's much more complicated than that.  Instead, I would recommend looking at the documentary section of whatever streaming service you use to see if your topic has been tackled.  Also, check out the internet for reputable sources.  And, if you can, find some real people to talk to -- politely -- about your topic.  A lot of people are open for discussion if the end result is going to be a real depiction of traumatic experiences they may have faced.

On the same note of creating realistic characters, keep in mind that everyone is different.  This means that everyone will react to trauma differently.  Sure, there are common threads for how people react, but there's also a large margin for people to deal with trauma in their own way.  This can result in odd coping behaviors, nervous ticks, reactions to seemingly mundane things, etc.  Keep this in mind when you write the character because it's likely that whatever they experienced will spill out into their everyday lives in very real ways that they will have to cope with.

3. Depictions on TV and other media are convenient.

Let’s jump back for a second to what I said about Law and Order: SVU and research.  When learning about how other people deal with trauma, it's really easy to lean on modern television for your research with depictions of trauma and how people deal with it.  This is ok -- to an extent.  It's a great starting point, but you need to realize one very important thing: tv and media are convenient.  What you're looking at is a half hour to hour long show made to stir up an audience to feel a specific way.  This means that details and real life experiences are changed and warped to accommodate what the author of the show is looking to create.

For example -- on SVU the mention of having a rape kit is almost a requirement every episode.  What most episodes don't tell you is that this process can take hours and each experience is different for the victim.  Also, there isn't always a helpful or caring police officer.  Every victim experience is going to be different and this is the sort of thing you need to consider in your writing.

4. Trauma can bring people together*

We've all seen the action movies where two characters experience something horrible together and, in the end, become love interests and are implied to ride off into the sunset together.  This is something that can happen in trauma.  When you've experienced something horrible you might cling to someone who knows what it feels like.

However (and this is where the * comes in) don't use this as an easy way out.  In fanfiction and the professional writing world there are far too many stories where the victim falls for the rapist or the person who inflicts the trauma in a romantic way.  Far too many times where the trauma is used almost like a first kiss that makes a person fall into a horrible and even more traumatic relationship.  Please don’t be one of these writers.  There are ways to do this where it works, but they are few and far between and most of the time you will alienate your readers.  So, please, if you choose to use trauma in your story in this way, please be aware of this issue and take care how you craft this result and the consequences.

As a writer, it can be tempting to go for the happy ending, where everything is resolved and the trauma is cured and the characters live happily ever after.  In real life this isn’t always the case.  Some people who have experienced trauma will continue to think about it and suffer from it until they die.  This is not meant to depress you, but it's something to take into account when you come up with your ending and where you want your story to go.

There's nothing wrong with aiming for that happy ending, but curing trauma with a magic wand doesn't happen.  There will be after effects -- like those nervous ticks and reactions I mentioned before -- and they will continue to happen.  So maybe, instead of switching the trauma off like a light switch, work this into your happy ending to show that there’s nothing wrong with this negative situation still affecting your character.  Give the character someone who understands and helps them work through it, give them a coping mechanism which gives them peace of mind when it comes up.  Or you can give them a new and happier thing to think of in their life that brings in new light.  What I'm saying is if you bring up trauma in your story, don't magic it away, there are actual real consequences and you can still use these and have a happy ending, too.  After all, there are plenty of people who have experienced trauma who are still happy people living their lives.

6. Be aware of your readers

There is nothing wrong with using trauma in your story -- but be aware that it happens to real people in real life. If you include trauma in your story, it has the potential of bringing up things that may have happened to your reader.  This means that your story -- no matter how well it's written -- can bring up bad memories and personal experiences.  Because of this, there are people who you will not be able to market your book to.  Also, there are people who may be disturbed by your imagery and how you portray an event, even if you do all the research in the world.

This isn't meant to discourage you, but rather prepare you.  Be aware that this can happen and you will likely run into people who mention it when doing tours, sales, and promotion of your book.  You may also run into people who fetishize certain types of trauma and might make you uncomfortable for what you've written.  This is just something to keep in mind, because it will happen and you will have to figure out a way to answer and react to them.

As a conclusion, I'm going to wish you luck in your writing and hopefully this article will help you in how you portray trauma in your stories.  Above all, I recognize, that you are the writer and you will always have the final say on your characters.  You can choose to completely disregard what I've written, but I hope you will at least consider it and I hope it helps more than anything else.

And in a final note, I'm going to present one of my own characters as an example.

In our book series, “Seeking the Storyteller,” we have several characters with various experiences over their lives.  One in particular is Cyn, who had a very traumatic experience in her childhood and is still dealing with it today.  Her close friend, Dox, is actually the shadow creature who lived in her closet and helped her escape.  Because of this, they share a very close relationship and he helps her deal with her experiences and daily life. 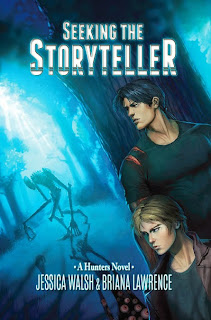 Seeking the Storyteller is available through Amazon or signed through our Etsy.


Posted by SnowTigra at 9:24 AM No comments:

We'll be at Anime Central!

We'll be at Anime Central from May 15th through May 17th!

You can find us here! 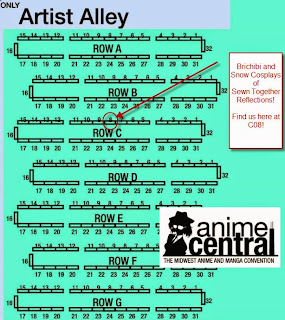 Posted by SnowTigra at 10:28 AM No comments:

The lack of blog articles this last week and this current week are brought to you by the fact that I saw Avengers Age of Ultron and while I loved the movie, I'm suffering from a lack of kick ass female interaction between characters.  So I'm writing.  Tune in next week for news of what convention you can find us and our books at next!
Posted by SnowTigra at 9:28 AM No comments: