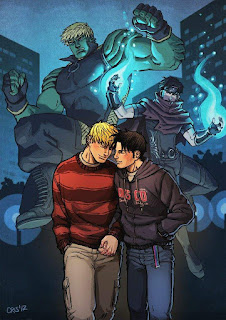 This entry was born out of our latest obsession: Young Avengers.  More specifically Billy (Wiccan) and Teddy (Hulkling).  My partner and I have been in a process of hunting down nearly every comic we can with them in it and it's been quite a ride and usually out of order.  Oops.  Originally I was going to do a review for each of these comics, but there's so many and comics are hard to track... so I'm going to combine them instead and hopefully make it easy to follow.

What Do I Need To Know?

Lets be honest, the world of comics is confusing and for those who are thinking of wading into the worlds of Batman, Ironman, Captain America, Superman or any other comic creation, there's a lot.  This makes it really hard to follow just one character without knowing about others.  So here's a quick break down, without spoilers, you'll need to know to look into Billy and Teddy.

Billy - Originally a Marvel fanboy he may or may not be the reincarnation of one of Scarlet Witch's children. He has the power to do basically anything by repeating his intention over and over until it happens. He also happens to be Jewish and Queer and those are central parts of his identity.  He also originally went by the name of Asgardian.

Teddy - While initally named after and resembling the Incredible Hulk, Teddy is actually a shapeshifter with connections to both the Skrull and Kree. He is fiercely loyal to his boyfriend, Billy, and serves as a sort of grounding force when Billy drops too far into his own brain and not so safe ideas.

Why Should I Be Paying Attention to Them?

In the world of queer fiction, there are a lot of tropes that we're all used to seeing.  I'm happy to say that this couple subverts most of those. While Billy and Teddy have their own issues, they are always portrayed as a loving couple who will endlessly risk life and limb for each other and don't get caught up in the oh so boring and standard 'who is he sleeping with this week?' plot lines.  What angst does come up never seems to be from their relationship, but rather from their powers and the world they live in. Because of this, they become each other's firm ground to stand on and it's refreshing to read.  Yes, sometimes the comics use the 'love conquers all' fix at the end of plot lines, but trust me when I say that their relationship in this case makes all the difference.  It's so rare that the love between two queer individuals is the life saving force everyone ends up needing and it's a welcome change that I can't get enough of.

So Where Can I Find Them?

Hopefully soon in the Marvel Extended Universe - like seriously, there are some things that NEED to happen in Infinity War and Avengers 4 that could lead to this. Signed, sincerely, a fangirl who needs this.

In all seriousness, we're still looking for all the comics.  Below are the ones we've located and read so far. Plus in order.  They are best when read in order, but we understand not wanting to wait.  I know I'm missing some here and these aren't full reviews, they're just summaries of the plots so you know what's going on if you can't find them or need an idea of where to start.

Young Avengers Collected - Allan Heinberg, Jim Cheung, Andrea DiVito
This is the beginning.  With the actual Avengers out of commission, these new teenage heroes show up and cause a ruckas even if they're trying to help.  So Captain America decides to put a stop to it and tell... their parents?

A solid introduction to the team and why these characters have the potential to be their own driving force.

Avengers: The Children's Crusade - Allan Heinberg, Jim Cheung
Wiccan is convinced that Scarlet Witch is his mother and she's not the monster that everyone else is making her out to be after the House of M storyline where she nearly destroyed everything. So he sets out to find her and, in true Billy fashion, finds more then he bargained for.

Because, as you'll learn, that is Billy. He gets into trouble, but he also kicks some major ass and is a lot smarter then the 'adults' give him credit for.

Civil War: Young Avengers & Runaways - Zeb Wells, Stefano Caselli
All the grownups are fighting and even the Young Avengers have been pulled onto Captain America's side and told to hold their ground until needed. But when the Runaways are pulled into the fight, they can't stay and watch, so the two teams end up coming together to save each other from the major conflict.

The nice thing is you don't need to know about the Runaways to read this, the comic does a solid job introducing them very quickly and how well the two teams mesh.

Secret Invasion: Runaways/Young Avengers - Christopher Yost, Takeshi Miyazawa
The two teams come together again this time because the Skrulls are invading and since both teams have a Skrull in their ranks, they're both very involved.

This one is obviously part of a larger storyline and you can tell in the execution. That's really only my one complaint. The anime style of illustration is also a fun aspect.

Young Avengers - Kieron Gillen, Jamie McKelvie, Matthew Wilson
Few things are worse then a space born suburban mother bent on chasing you away from home.  Billy had the best intentions with summoning Mother, but now the team as a whole has to deal with her, along with Kid Loki and America Chavez.

THIS is the arc that hooked us.  I can't really communicate how creepy and effective the villain of Mother is. You kinda just have to read it and you'll get it. Also, Kid Loki steals the entire comic.

I know there are more, we're still looking.  We have two comics on order from our local comic shop and pages are still being scoured for more mentions. Then there's fanfiction to search for, and deviantart pages to favorite and all sorts of things. In a world where queer characters are far too often fetish-ized for the consumption and pleasure of straight fans, it's super refreshing to see a queer couple (and lets be honest, nearly an entire queer team) take center stage and not devolve into the drama and cat calling that the popular media would have you believe we all live. Billy and Teddy are a breath of fresh air and I really hope they have many more stories and adventures to come.

Posted by SnowTigra at 7:01 AM No comments: 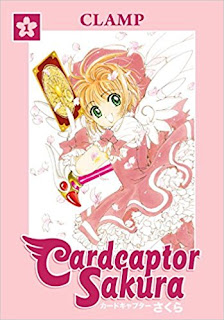 Part of the magical girl genre, Sakura is a normal young student who accidentally releases the Clow Cards one day while down in her father's office. Now it's her job to collect them again and take control of their magic. Dressed in the cutest of outfits, thanks to her best friend Tomoyo, with Kero - their protector - she's ready to go after the cards and collect them all. 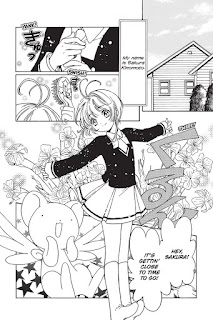 Ever since my days of drowning in anime - still haven't come up, lets be honest never will - I've had a love for CLAMP's work. As the years have gone on, they've changed their style and I've disliked more then I've liked but I'm still nostalgic for the original CLAMP days when they did what they did best: parody popular anime genres.

Cardcaptor Sakura is one of those parodys, aimed squarely at the 'collect 'em all' genre of Pokemon, Yugioh and the like.  However in that parody they've also created a story about a whole host of characters I love and not to mention a gorgeous set of Tarot cards that I will happily admit to owning. Picking up this volume gave me the chance to get back into that story and read the manga I never got around to reading before. Not to mention enjoy all of their amazing art.

CLAMP has a habit of creating characters that stick with you and this series is no exception. The cute trend of Sakura getting a new outfit with each card she chases - thanks to her friend Tomoyo - is a hilarious edition and serves to highlight the art style I love so much.  Beyond that Sakura and her friends are fleshed out quite well during the battles and cards they have to collect. As usual, as the story goes on, you find out that Sakura isn't exactly normal and has a particular family history that lends to why the cards chose her, but there's only a few threads of that in this volume.  I'll have to get the next ones to learn more and they're already in my cart! 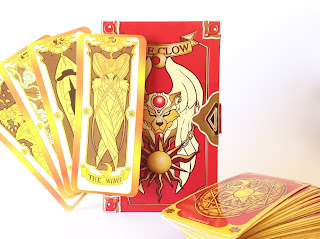 I do love the fun pokes the series takes at well known cliches in their own genres. The underlying queer relationships in magical girl anime are there, along with surprising family connections and rivals that really would get more done if they stopped their pissing contests. The Clow Cards aren't just items to be collected, they are almost characters in their own right, giving the show a unique twist.

A special add on to this large collected volume are the color inserts at the end of all the stunning coverart.  It's like getting your own mini artbook with the manga and I appreciate that.  I only wish I'd had access to this volume earlier and I probably would have read the manga sooner. It also reminds me that I need to finish the anime, so that I can check out the new Clear Card series that's currently running.

As a trip down nostalgia lane, this collected edition is perfect.  However, with the large amount of magical girl shows and manga out there now, I don't particularly see this one standing out. More popular shows like Sailor Moon and Madoka will easily overshadow this series and probably push it back out of people's notice.  The charm of CLAMP lies in knowing and following them as artists and knowing that they used to do a really good job at parodying various genres. It gives their series a new spin that others might miss without that knowledge. Still, if you are a fan of CLAMP's work, from any decade, it's a fun read and they're masters at inserting plot threads and callouts to their other series, so it's a can't miss.
Posted by SnowTigra at 9:29 AM No comments: