This Holiday Season - Don't Be Afraid to Skip Out 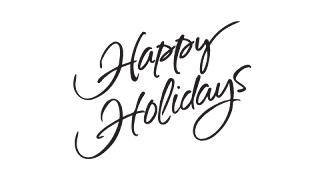 With the holidays coming up, there's a lot of commercials, posts and talk about family.  This is unavoidable as it seems to be part of the season as a whole, but sadly not everyone has a chance to take part in that part of the holiday.  So the point of this post?  That's ok.

Speaking as a queer, non-christian woman in an interracial relationship, there's a lot of variety in my life that my family doesn't seem to understand.  This has become abundantly clear in the recent political climate and while it's not a matter of all out hate (it could be a lot worse and it has been in the past), there are just some things that I'm tired of explaining to them or can't even begin to explain in a way they'll understand.  So we've opted to skip my large family Thanksgiving and may or may not be following suit with Christmas - we'll see.

But the heart of the matter, and what I really want to talk about, is the hurt that comes with that.  It's really hard for me to not go to family gatherings, because it's just something I was raised doing. There's this dull shame in the pit of my stomach when I consider the idea and agree to it, because the voice in the back of my head says "But I'm supposed to" regardless of my own personal disagreements with my family.  I also know my partner has a large family who is either out of state, out of reach or just plain not a part of her life.  Situations like this lead to both of us feeling lonely, homesick and just all around left out when those required commercials and posts come up about family cheer and gatherings.

The point of this post, and me writing this, is to say that shame is wrong.  With this post I am telling myself that it's ok to skip out and if you find yourself in a similar situation this applies to you too.

There is nothing wrong with choosing to take care of yourself during the holidays and avoid situations that can become less then pleasant.  Family is family and they either will or won't agree with you and your life, but if you need to take yourself out of the situation to take care of yourself, that's perfectly ok.  There's a whole host of reasons why people might need or choose to do this and in the end only they can decide for themselves and when they do, it's ok.  Don't shame them for it.  And especially, don't shame yourself.

On our part, we're still celebrating and cooking for ourselves.  She's making dinner while I'm at work on Thanksgiving and we're getting together with a friend on Sunday who is also choosing to avoid their family gathering. I've heard other friends refer to it as 'Friendsgiving' which is just as legitimate. In the end, this holiday season is about celebrating the year and what you have.  And if you find, like us, that 2016 has been a bit much to deal with, then yes you should take a day or two off.

It doesn't mean that you love your family any less.  It doesn't make you any less of a person.  It means you're realistic and realize that above anything else you have to take care of yourself, because family and friends come and go, but you will always be stuck with yourself.  If you are trapped, then life can be miserable, even when surrounded by supposed holiday cheer. So it's ok.

No guilt.  No shame.  Take care of yourself these last couple months.  And here's to hoping that next year will be better. Or, at the very least, a little more tolerable.
Posted by SnowTigra at 7:24 AM No comments:

I was searching around on the internet to update some of my information on other pages to find that CosplayLab.com had actually closed down (quite a few years ago, oops).  Unfortunately this means that I've lost my list on the exact years when I made certain cosplay, so I'm starting this to record some of that information and call back to some of the very old cosplay that I've made over the years.

So lets start with one of my old favorite shows: Yu Yu Hakusho! 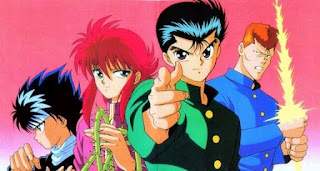 Yu Yu Hakusho is an anime I've loved since I was back in college and while Gundam Wing was one of the first major fandoms I participated in, this one was a close second.  I even wrote a fanfic or two and my wifey loves it as well.  So I've cosplayed quite a few characters from the show. 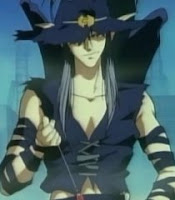 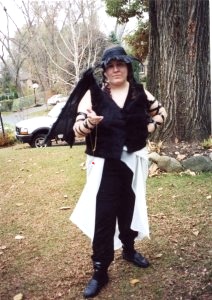 Kuronue - From the first movie, Kuronue was the first character I leaned toward, just because of his design and interesting story.  I was quite upset that he wasn't included in the main series, but that didn't stop me from cosplaying him.

This costume was actually made with help from my mother.  She made the vest and white waist drape while I bought the wings (Hot Topic) and pants.  Then I made the hat from a spray painted straw hat from a local thrift store.  My father also made the scythe weapon which I still have to this day and it still looks awesome.

Pitfalls of this costume?  I couldn't figure out how to make the arm ribbons work, so I ended up using electrical tape on my arms.  While this worked, it meant that I had to pull them off each day and was left with red marks from the tape.  Not something I'd recommend. 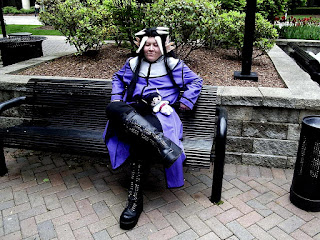 Yomi - As an anime fan I've always been drawn to villains, especially when they have interesting stories.  Like Kuronue, Yomi's backstory with Kurama also interested me and I have a love for the military jackets that show up in quite a few different series.  Yomi quickly became one of my 'dream' costumes, that I honestly didn't think I could pull off, but then decided to just go for it and do. I made the jacket, wig and Shura plush.  I also made the ears from three pairs of cheap prosthetic ears, glued together.  Boots were borrowed from a friend, but they made the costume.

The wig is actually the part I'm the most proud of.  It started out as a normal cheap black Godiva style wig cut to the right length.  Then I made the horns out of paperclay, which dries to resemble bone, but is still soft enough that I could poke holes into it and sew them into a denim frame attached on the underside of the wig.  I totally made this up as I was going, because wig tutorials weren't a huge thing on the internet yet and it mostly worked.  My only regret is that I didn't take care of it, so now the wig is far too tangled to reuse, but I still have the jacket. 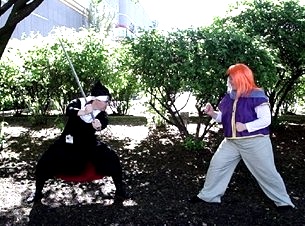 Mukuro - And finally, one more from the villains, though she's not really a villain, really.  Mukuro's backstory was awesome and I loved the fact that there was a female character that kicked ass and that I felt comfortable cosplaying and was within my skill level of creation.  (Hiei in the picture is my friend Strange Land Costuming.)

I bought the pants - some super comfortable pajama ones in the right color - and made the mask and top vest piece.  Sadly I don't have better pictures then this, but I remember it was a very comfortable costume to wear and still have most of the pieces, though they don't fit anymore.

All three of these costumes are quite old, but were the most fun.  Isn't it strange seeing me back before I made dresses and ballgowns?  To be honest, this was before I became more comfortable with my body and back then I didn't think I could pull off a female outfit and still look pretty.  Obviously I don't feel that way anymore, but I still had fun cosplaying even back then.

So here's a final throw back with the Wifey as Youko Kurama in a costume made for her by Strange Land Costuming.  Also, the other Kurama is our friend Rosanna.  The below picture was taken back in 2004 if that gives you any idea how old this is. ^__^ 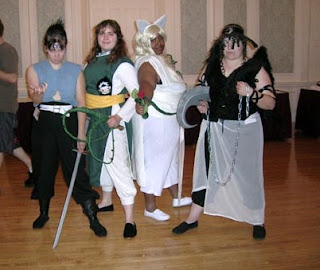 Posted by SnowTigra at 9:33 AM No comments: