I'm back from my hiatus!  Sorry about that!  I had to finish editing Beneath The Chapter - the sequel to Seeking the Storyteller, which will be out in April. Now, since it's Wednesday, back to our regularly scheduled entries. 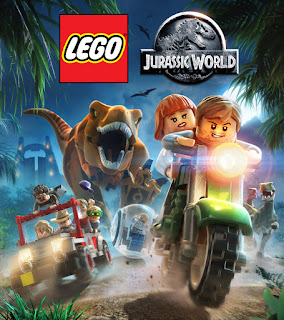 Intro:
The Lego series of games has quickly become my favorite over the years, watching it grow through glitches to perfectly capture the immensely enjoyable time sucker it now is.  More then playing with the little inter-connective blocks as a kid, these types of video games are perfect and I'm not kidding when I say that when a new one enters our house, there's nothing else we want to do but get every single gold brick there is.  Oh, and all the red ones too. 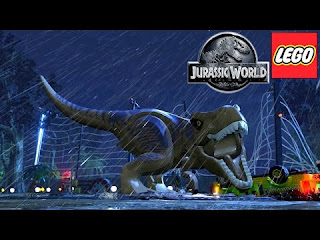 Summary:
Everyone knows the story of Jurassic Park.  The old series of movies (and books) about a billionaire dreamer who creates a theme park full of dinosaurs cloned from prehistoric mosquito blood.  What could possibly go wrong mixing humans and dinosaurs together in a Disneyland setting?  More over, why wouldn't be still keep going to such a park, even if there were so many deaths the first time? Oh, and now it's completely kid friendly because they're made of Lego blocks!

Thoughts:
Back in 6th grade, I have an especially vivid memory of my dad telling me I could invite two of my friends to a new movie coming out that we all wanted to see.  Jurassic Park was coming to the theaters and we were all hyped - I mean I'd read the book multiple times and practically had it memorized.  From the trailers we got glimpses of the dinosaurs and I couldn't wait to see it in the theater.  I remember sitting through the movie with my friend Nate - who was completely engrossed - and Anne - who was terrified and squeezing my hand the whole time.  I loved the movie and watched it too many times to count, especially since my dad loved using the T-Rex scene to show off his new theater room sound system.

This Lego game was honestly like taking that piece of my childhood and playing it all over again with a Playstation controller.  Rather then recording new lines, you can tell they lifted them right from the movies (which mostly works).  The story changes only slightly to make it very kid friendly (no one dies) and it's just a lot of fun playing as the different characters and the dinosaurs as you relive the movie plots you grew up with.

The game is blocked out into four parts, one for each movie, and as you complete a movie you unlock the next and corresponding characters.  Like I said the dialog is lifted right from the movie, so Lost World and Jurassic Park 3 become almost a game of witty one liners spouted at the right times rather then a full on story.  But it doesn't really hurt the game too much - just causes it to seem a little bare bones at the time.

The most interesting thing about this game - I found - was the characters' powers.  In the Marvel, Star Wars and even Indiana Jones ones, it made since for the characters to have certain abilities and they fit really well.  I'll admit I was concerned about how this game would handle that as the characters don't seem to have natural powers, but they did it quite well.  I actually found it quite amusing that Dr Ellie Saddler's power is the ability to dig in piles of poop - because she does it in the movie and she can also grow plants.  Dr Alan Grant has the ability to unearth bone piles and cut vines with his raptor claw.  Honestly their powers often made me laugh because they fit so well, and yet it was comical to see them put to real world game uses.

Playing with the dinosaurs was also awesome.  Not only do they act like cars - so you can just run into items and get the studs from them - but they come in different forms and even the dinosaurs had different abilities.  To the point that you had to create your own hybrids to do certain tasks in the game.

I honestly think my favorite part is how this game very much mastered the problem solving aspect.  It forced you to keep track of what characters could and couldn't do certain tasks and what dinosaurs fit as well.  So creating the perfect team to do something right took effort and in the end it felt like you'd solved a huge math problem - without all the stress and calculations you would expect to be involved. The game is complicated, but it's a complicated kind of fun that is easily learned as you play. 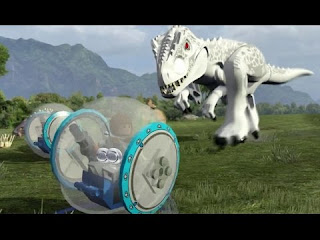 How Much I Played:
The whole game.  OK, with a few teeny exceptions where the water and flying dinosaur parts were completed by my partner, but we played (almost) the whole game together until 100%. I am not kidding when I say we couldn't put it down and I'm seriously hoping that future Lego games are just as good.  (I'm looking at you Lego The Force Awakens.)

Grade:
Absolutely loved it.  It was a great dose of childhood nostalgia with all the mechanics I love of the Lego games. And I can totally see myself throwing this in in the future if I ever need brainless block destroying after a hard day at work.

Cosplay?
I sadly don't have any pictures of this.  But back in 7th grade, after I saw the first movie, I went to school on Halloween as a park worker from the first film.  I remember I had a Jurassic Park shirt and a matching hat and we found a plastic action figure of a raptor looking dinosaur that I locked in blue cage to carry with me.  My dad made me an official looking badge proclaiming that I was a Park Worker with a little bite taken out of the corner and I was all set.  I remember loving the costume at the time and I still think that - for a 7th grader - it was pretty awesome.


Posted by SnowTigra at 4:31 AM No comments: