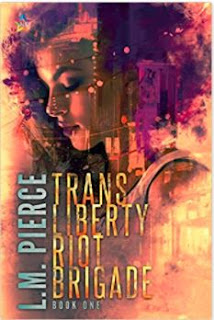 Andi's world is very different from our own, right?  Her life consists of hiding from the police, living with a freedom fighting group and trying to keep her head straight between drug fixes. Young and foolish, she is still incredibly loyal to those around her and when a new mission comes up, she'll easily go along and do what needs to be done. Andi's life in the walled up United Free States is a lot of following and doing what she's told and still messing it up. But she's going to have to learn to make decisions on her own, because there aren't always going to be people helping her out of situations.  Eventually she's going to have to help all of them.

My partner and I picked up this book from the author at a convention in Portland. I would have to say the first thing that caught me was the character's world, and the very specific queer dystopia that made up her life. In her world, which seems so wildly different from ours, there are very real and uncomfortable parallels.  Sure, there's a wall, much like the one that Trump wants to build, but it's so much more then that and the book uses these qualities to suck you in right away.

Andi's voice and slang in the book is striking and takes a bit of time to get used to.  It's so wildly different from what I'm used to reading that it took me some time to get into.  However, the author has obviously paid attention to this because it's very consistent and it's a great tool to suck you into Andi's world whether you want to be or not. Her struggles and trials are that much more sincere and real when you read her expressions and can still understand them even when you aren't given a glossary to explain all the terms.  Nope, not needed, the author has paid enough attention to basically create a whole slang language and it feels real. I really appreciate that.

My only hesitation with the book is that Andi spends most of it as a passive observer. Sure, she's running with the others, on missions and trying to escape. However in that, most of her actions are not taken until someone tells her what to do.  It can be infuriating because the book is told in first person and her 'wants' are quite absent save for general survival and drugs and not being snipped. After a while I wanted to grab Andi and shake her, but I couldn't exactly blame her for acting the way she did, so it ended up not being a bad thing, just a bit frustrating. Someone else's mileage may differ, but that quality stuck out to me.

Overall I ended up loving this book, though it is a gradual love that it built as you read each chapter and the characters burrow more into your head. Getting into the world and the vocabulary takes a bit, but the journey is worth it and I am looking forward to the second volume and how Andi's journey will progress.

Where you can get it:

Ninestar Press
Amazon
Posted by SnowTigra at 11:57 AM No comments: 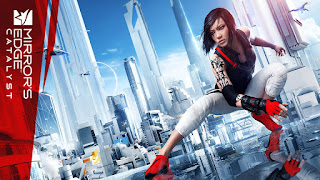 Ohh, here's a subject I haven't reviewed in a while, a video game!  In case if you've forgotten in that time, the point of this section is for me to review video games that I haven't actually played.  Because I'm more of a video game voyeur then anything else, when a new game comes along I'm usually watching my wifey play it. That's the case with this game, and even though I wasn't the active party, I watched the whole game and loved it! 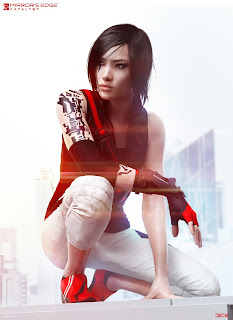 In the distant future the world is now a utopia of business and clean solid colored walls. Everyone works for one company or another and it's all run by the Conglomerate, enforced by a group called Kruger Sec. Faith is a member of a group of runners, who work as mail deliverers throughout the city and also as a resistance. While making deliveries she must also work to discover the true reason why she was locked up and what happened to her family - more specifically her sister.

My wifey played through the first Mirror's Edge when it originally came out and we both loved the game.  Not only is the world stunning, but the game play is unique being that it's always in a first person perspective while you're jumping and parkouring through this futuristic landscape.

With the second game, Catalyst, the creative team rebooted the story of the first.  This time the world was a bit different in that it was more clean and more refined, with the plot being told in a slightly more coherent way.  Faith was better defined and the world seemed more open and challenging - especially since you have no option to pick up guns, but you're being chased by people with them on several missions. 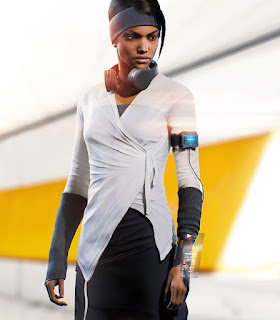 That isn't to say there aren't plot holes, mind you.  While Faith's story is told in a better way then the first, there are still noticeable gaps in the storytelling, especially at the end.  Some things are tied up, but it's obvious that the team is expecting to make future games, so there are threads left hanging and there is a noticeable lack of a boss fight all things considered. There's also hints about other characters that make you yearn for DLC with their own side stories.  I know I can't be the only one who wanted to play as Icarus by the end and learn more about Black November and even Bird Man.

In the end it's a great game with a very distinct atmosphere, but it leaves me wanting more.  This can be great if there's going to be another game.  But considering that I know this one wasn't that popular I have a feeling I'm going to be disappointed on that front.

How much did I play?

Ha!  Though I think this game would be stunning in VR, the first person perspective does a great job of getting you as close to that as possible.  I had fun watching her play, but man some of those heights felt way too real.

Posted by SnowTigra at 6:19 AM No comments:

Books You Should Check Out: Some A**hole In Pajamas Talks About Writing by Xero Reynolds 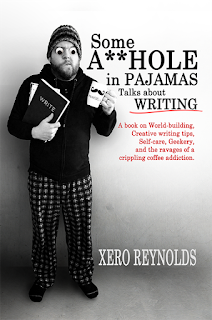 By far, one of the best things about having awesome author friends is finding out about their new projects and getting to be one of the firsts to preorder something when it's coming out!

We met Xero at Anime Iowa a couple years ago.  He's a good friend, great inspiration and I love hearing his view on a lot of creative minded things, especially world building and the characters he creates. So when this book was announced, aw hell, you know I already have my copy preordered!

You can preorder yours here and even read the first chapter for free!  Check it out and get your copy.  And while you're at it, attach it a real set of googly eyes for endless entertainment ^__^


Posted by SnowTigra at 8:56 AM No comments: