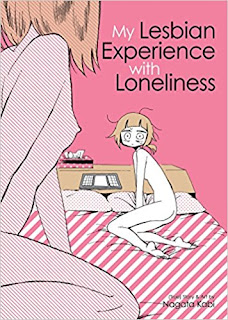 My Lesbian Experience with Loneliness by Kabi Nagata

It's hard to describe this book and really do it justice.

I picked it up on the recommendation of a friend on Facebook, and do not regret it for a second.
The book tells, in manga form, the story of a young woman who has never viewed herself highly and how that has effected her view of herself and the world, and held her back from living.
This is an intensely personal story from the author. In a simple and crude style she gives us a view into the personal and crushing parts of her life. She doesn't expect us to understand everything and doesn't give excuses, but is rather very up front and blunt with the turns her life has taken and why and where it has taken her.
While some of her experiences were totally foreign to me, several hit far too close to home. Several times I found myself looking away from the book and pausing as I remembered parts of my life growing up. This is not just for queer teenagers, but also speaks to eating disorders, issues with belonging and the need to be accepted but also be alone, just to name a few. It is an emotional book to read and grasp, however the rough manga style makes it very easy to read and light to take in, to contrast the heavy material. 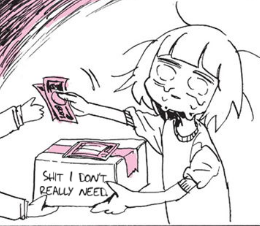 But with all of that it's also worth it. No deep answers are given, no fixes suggested, just honesty. The type of honesty I wish I'd had when I was experiencing the worst of this in my teenage years. The author doesn't claim to be an expert, or even fixed. She just exists and is still learning how to be herself and deal with who she is, if she even knows.

In that I found the book to be refreshing and needed. Having someone present this much emotion and personal info while not claiming to be an expert is so sincere. This book's simplest message is that 'you're not alone' no matter how alone you feel, and that is something so important.  It's even more important then being fixed or able to cope with life, because sometimes just having someone understand is enough.
Every once in the great while I come across a book that I have feel a deep need to buy multiple copies of and give them to friends. This is one of those books. I highly recommend giving this book a read and a chance. It doesn't offer any answers or fixes, but sometimes just knowing that someone else gets it means just as much.  Seriously, go get yourself a copy.

BTW: This was soooooo me in high school.  I should have known:

Posted by SnowTigra at 6:58 PM