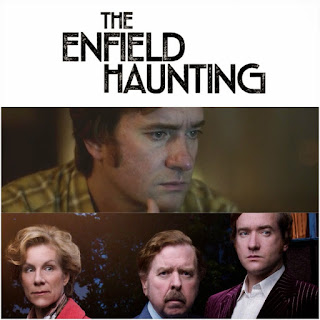 What's it about?
A three episode mini series I found on Hulu, The Enfield Haunting tells the story of a poltergeist that haunted a house  and family in Enfield, London.  It's marked as being based on real events.

Review
The first thing that struck me about this mini series is how unclean it is.  I'm not saying it's dirty, but being a production from over seas, I immediately noticed the difference in style.  Whereas here in the US, haunted house stories are presented with bright lights and pristine white walls and clean houses, this piece has a home that looks decidedly lived in and a family that is very plain.  This gives the mini series a very 'lived in' look and makes it feel that much more real.  That added to the non-shaky camera that follow the main characters like a peeping neighbor, gives you the feeling of being right in the house while it's all happening.

It's a very realistic and startling effect that adds to the story and is honestly something I wish they would do more often in American movies.  Heck, this would have made movies like Paranormal Activity that much scarier.

The story is presented in a very real and authentic, lived in look that stays the entire film.  Bits and pieces show up here and there to tell you the poltergeist is real, but yet there's still a lingering wonder if those parts are untrue and maybe the family has been lying the whole time.

I don't want to give away spoilers, but I will say that I was quite happy with the ending presented and the revelation to why the poltergeist actually exists.  There's a chance that there's much more to this story then we see, but you're still left with quite a bit of closure because you learned what you needed to know.  I do plan on looking up the actual case after watching this, to see what was actually reported to have happened, but I found this to be quite entertaining and a very good story.  It certainly didn't have and didn't need all the gore we're used to seeing in American movies lately and it was quite a welcome change.


Watch it on Hulu!


(Disclaimer: I watched this on my own Hulu subscription, no money was received for this review.)
Posted by SnowTigra at 11:23 AM