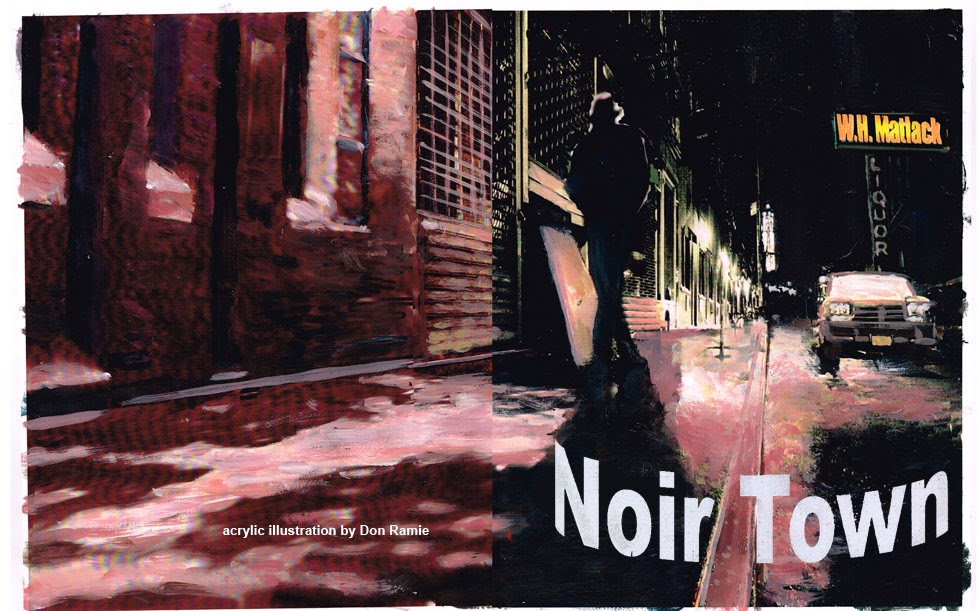 In the process of finishing my own first draft and editing it I completely spaced on posting a character interview yesterday, sorry about that!  So, as to not be too late, here we go!

I feature character interviews on my blog at least once a week.  If you're interested, and would like to have one of your characters interviewed, just drop me a message and let me know!

A little about myself, eh? Yeah, well, I live in New York, a place I call Noir Town. That’s right. The dark city. Why? because it’s dark, forbidding and full of crime being committed in every little greasy corner nearly every hour of the day. No, I take that back. Nearly every second of the day.

I know what you’re thinking…why do you live there? Yeah. Good question. Well, I live in this dark, sinful city because it’s the only place to get a decent pizza, and pizza is important to me. It should be important to everyone. Pizza, in case you are wondering, is the most important thing in the entire universe. Except maybe for The Three Stooges, God rest their immortal souls. They were more important than anything, and now they’re gone. Fortunately, in a city that never sleeps and is constantly hung over, you can usually find a little theatre somewhere that’s showing a Three Stooges movie. Somewhere.

Aw, I’m jes pulling your leg a little. Actually, I live here because I’m a private detective. My job involves things like finding people who have been swallowed up into the dark maw of this unforgiving berg. Sometimes it involves following a spouse around to find out, “Is she or he really being faithful?” They usually aren’t.

So, you see, the city gives me a good living, and I usually don’t have to face any real dangers. Not that I’m afraid of that, of course. Take my most recent case for example. It involved a very notorious kind of sex trafficking. Notorious because it was being run by some very powerful people. People you just didn’t want to cross. People who would try anything to get you off their trail. Blow you up even. I call it, what else, Noir Town.

That my mom is a borderline psychopath who loves to kill. Fortunately she’s in a special retirement home upstate that’s staffed with people who know how to take care of her. I see her as often as I can. It helps to keep her on the right side of sanity. A person can’t really have his mom running around slashing throats indiscriminately. Of course sometimes she does come in handy for certain “special projects,” shall we say?

Well, my mom was a member of the French resistance during world war II. She was known as Suzette the Slasher. She was a genius at operating right under the collective noses of the Nazis in her sector. She absolutely loved killing SS officers, and she never got caught. My favorite memories are of her training me and my older sister in the clandestine arts…pretty much from the time we were toddlers.

That affects me by helping me to keep safe in my day-to-day operations. Often I find there are people looking for me. Pretty much with an intent to do me harm.

I wrote all about it in Noir Town.

Me? Oh, I’m just an average PI. I find answers to questions people would rather have go unanswered. Conflict? Most people know better than to try anything. I won’t shy away from it exactly, though. Mostly I circle around behind it.

My hobbies and special talents are pretty much the same. They involve keeping my mother and my sister from killing too many bad guys. Oh, did I forget to mention my older sister? Yeah. She’s a diagnosed sociopath. Loves to kill people. Works for the NSA as their top assassin. Expert with all types of weapons, especially sniper rifles. Very much appreciated by her employers, too. Oh, you didn’t know the NSA assassinates people? Well, I’m really not supposed to say anything, but…

I don’t mean that to scare you any. She’s really got a good heart. Only kills for business, or to protect me. You know how big sisters are.

To stay home, eat pizza, watch a couple of Three Stooges shorts, and then see if the Mets are capable of winning any baseball games at all. They probably aren’t.

Of course there’s my mom and sister. I think I’ve said enough about them, but there’s also my best friend, Sure. That’s what we call him, Sure. Because he’s always sure of himself, and his real name is Sherman. I’ve known him since grammar school. We were both Seals. In the Nam together. Well, he went to law school, and is now my lawyer. He also has my back during some of our operations. I’ll just leave it at that.

That would be my dad’s old Colt .45. You see, my dad was in the OSS and met mom when he was working behind German lines. He taught me how to shoot, God rest his soul. I don’t usually carry, but if I’m facing a serious situation, it’s a pretty good tool to get me out of it. It’s a real American gun. Not like those pansy nine millimeters that everyone seems to like so much. Frankly, I don’t trust anything measured by the metric system. That’s for nerds who major in chemistry.

Well, I know it sounds like a cliché, but this gorgeous blond walked into my office asking for help.

I was thinking of retiring and moving upstate. Being a little closer to mom. Taking it easy. My sister says it’ll never happen. Something about my being too much of a meddler. She’s probably right. She usually is.

I don’t want to brag, but you can read all about my recent case in the book titled, “Noir Town.” It’s available on Amazon.

Posted by SnowTigra at 5:45 AM