Just in time for the holidays my partner and I are done with our final edits for Seeking the Storyteller, our first novel together.  As it would figure, it's the holidays so we don't expect a response from our publisher until Monday, but it still feels really good to have it all done.

At final edits, the novel is 321 pages long!  I'll post more information once we have it, but in the meantime here's the cover and summary.  As a side note if you publish reviews of books and are interested, let me know and I may be able to get you a review copy. 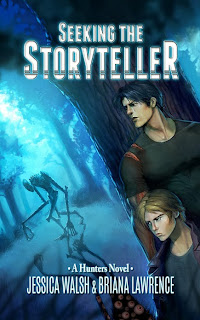 They say the Storyteller lives in a massive library full of books that tell the story of every being's life -- living or dead.  He can read these books and rewrite them; changing anything he wants, even if it's already happened.  Alix DeBenit is determined to do anything to get his family back and he knows the Storyteller can do just that.  The problem is that he was trained to hunt demons...

Posted by SnowTigra at 1:41 PM No comments: 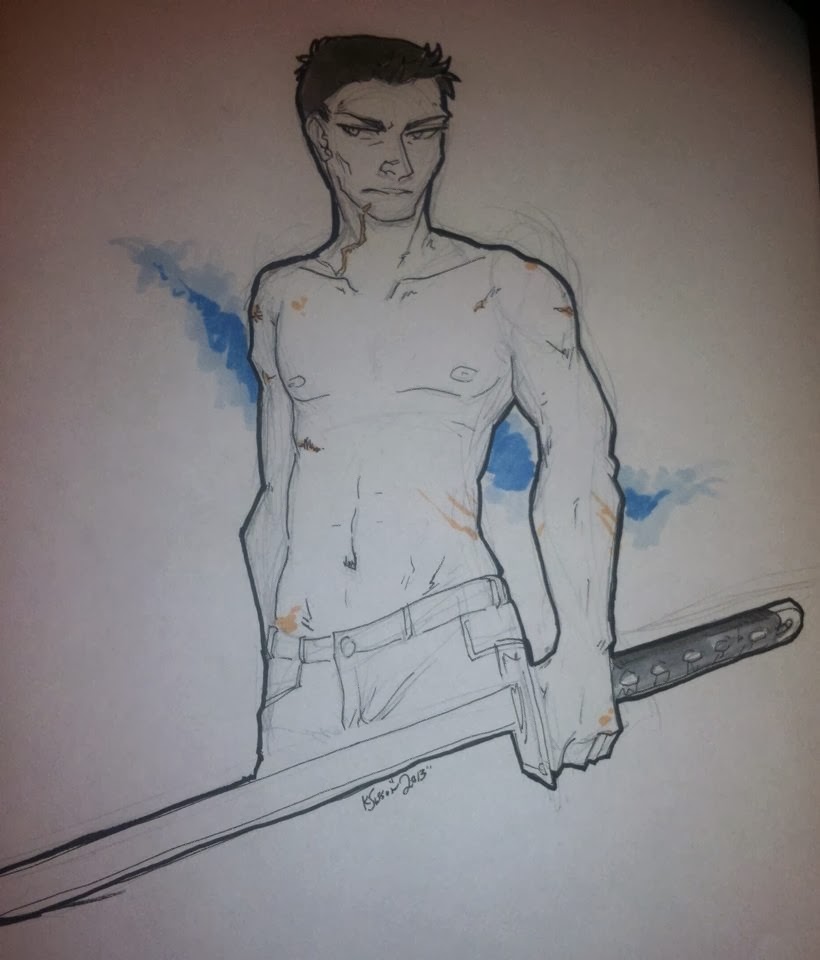 and I wanted to share this awesome sketch we got of one of our characters.

When we go to Anime Conventions we always set money aside now to get at least one commission.  Basically, we have descriptions and we pay the artists there to sketch at least one of our characters so that we have artwork to show on the site and then people can see what our characters look like.

This one in particular, drawn by thedietelfdraws, is of Xaver, one of the Hunters in our book.  He's an intimidating and rough loner that taught Fagan how to be a Hunter and showed him the more interesting perks of the life style.  They were partners for a while until Xaver went out on his own.  when the story starts, Xaver has called up his old trainee to say he's got a situation he needs help with.  Which is really strange, because usually Xaver is capable of handling anything thrown at him.

We have other fanart from past conventions and I'll share those too over the next couple weeks.  In the meantime you can also see them at my author site in the 'library' section.
Posted by SnowTigra at 8:58 AM No comments:

Not all stories can take place in our world, and I'll admit I have a preference for reading and writing things that take place in a world at least a little different from our own.  To that note, I'm going to try and explain how I create the worlds I write in.

I have a huge preference for the genre of Urban Supernatural - where it is our world, but with a few differences.  For example, where vampires, fairies and magical powers are real.  It's the idea of taking these fantasy worlds that people have been writing in for years and melding them with our own worlds.  (Some of the authors I read in this genre are Kim Harrison, Rachel Caine, Jenna Black, in case you were curious.)

The approach I take to creating an Urban Supernatural world starts very simple.  Depending on my story and the characters and plot I want to portray, I'll start small and expand.

For example:  Let’s say I have a character who his minor psychic powers, like being able to touch an object and see what happened to it.  This leads to - Are there other characters like him?, Has he met these people?, Does he hide his powers?

As you expand your world view, it'll help you tweak the world/universe you're creating to fit.  Think of the news stories you've heard on the radio or seen on tv and use them as examples for how people might act in that situation and just start to flesh it out as much as you can.

Keep in mind that a good portion of this planning will probably never make it into your book - but that's ok.  The better you understand your universe, the easier it'll be for you to work in it without pausing to wonder how a certain idea will work.

Something important to remember - keep your idea grounded.

The key, at least I think, to remember with Urban Supernatural is that it's still our world.  So your ideas, as fantastical as they are, should have a root of truth that your reader could relate to.  Your reader should be able to close their eyes and imagine that the neighbor next door might be your character.  In other words, they should be able to imagine your created world as a part of their own.  This is what makes Urban Supernatural fun and interesting to read.

A very good example, and the one I always go to when I'm explaining this idea, is the universe created for Kim Harrison's books about the Hollows.  Her universe is ours, with one major core difference: a set of genetically altered tomatoes accidentally killed off a huge portion of the human race.  This, in turn, made it near impossible for supernatural creatures to hide anymore, so they were forced to step out.  And since humans stayed away from tomatoes, the vampires are now found in pizzerias, almost like a supernatural Italian mafia.

That sort of chain reaction is something you want to strive for with Urban Supernatural, because it makes your own twisting of our world believable and it's not such a jump for the reader to imagine that your character lives down the street, and it's just that no one has noticed how different they are yet.
Posted by SnowTigra at 6:39 AM No comments: