Where To Find Us This Weekend: Pride St Charles! 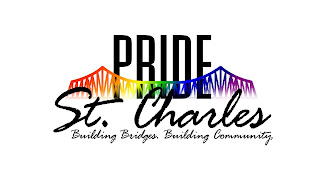 This weekend is going to be awesome!  For Saturday we'll have a table at Pride St Charles with our books, new costumes and an awesome new rainbow pixel quilt! If you're in the area, come say hi and check out our queer magical girls!

Also we have new stickers specifically for the event! 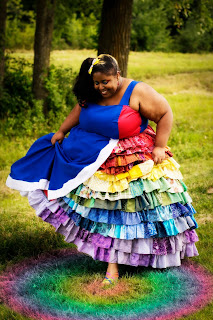 Posted by SnowTigra at 8:27 AM No comments:

Pride Month and Where I Fit (or don't) Within My Family

That fantasy is a lie. It's not our fault. It never was. What I failed to realize is that this wasn’t my job. I could twist and turn all I
wanted, but it wouldn’t matter until my family actually made a space for me
to fit into. I would never be able to fit into something that wasn’t there to begin
with. Pretending to be something I wasn’t to fit their tiny little space - or worse,
amputating a part of myself just to be around them - wasn’t helping anyone. It
was hurting me. A lot. And I couldn’t do it anymore. That day, on the way back from the funeral home, we ranted and I cried. A lot.
No part of that night was about my grandma, as it should have been. I’d come
to terms with my grandma’s death before the funeral, honestly, that part I’d
already worked through. Instead I was angry and I was in pain because of the
family it was killing me to hang onto, and I needed to let them go. It would never
matter how much I tried or how many chances I gave them. The ball was in their
court and it always had been. There was nothing I could do until they actually
picked it up and moved on. No amount of me trying was going to force their
hands, no matter how much I wanted it to. ‘Coming out’ is the moment in a queer person’s life where they step out through
a closet door and finally show the world who they are. I’ve come out, many times
since middle school. I haven’t always been accepted, but it’s always felt like some
sort of progress was made - except with my family. Somehow, there, my queer
self was revealed only to be shoved back in the closet and hidden away with
every other dark denied secret. It didn’t matter how many times I pulled it out, it
was always pushed right back in, ready to be ignored for another day. I think, sometimes, ‘coming out’ is simply a door. A door to leave behind yourself
and the others who won’t accept you. In this case it was leaving my parents’
house and walking down the street to join my partner in the home we’ve created
with my friends and chosen loved ones. From the outside I can see how damaged
and condemned that old family house is. I can also see that I’m not the one doing
the damage and it’s not my job to fix it - because that’s not where I live anymore. I’ve built for myself a life and a home that’s much more stable. One where I fit in
and don’t have to explain myself to anyone and pray that they somehow still
remember what I said. There’s a stable family inside, but they’re one I’ve built
and they accept me for who I am. I moved away and made a place for myself.
It still has a phone to get those calls and a door to be knocked on, but for the
first time, I’m done being the person who needs to initiate that contact. Beyond that, there’s another piece that’s just as important. I don’t need a reply.
At this point, whether they come knocking or not, it doesn’t matter. My identity
doesn’t include them, and I’m no longer me: whether they like it or not. Instead
I’m just my queer ass self, living here with my partner and our three cats. No
part of that identity is theirs, acknowledged or denied. I’m just me. Period. Happy Pride.
Posted by SnowTigra at 1:18 PM 3 comments: