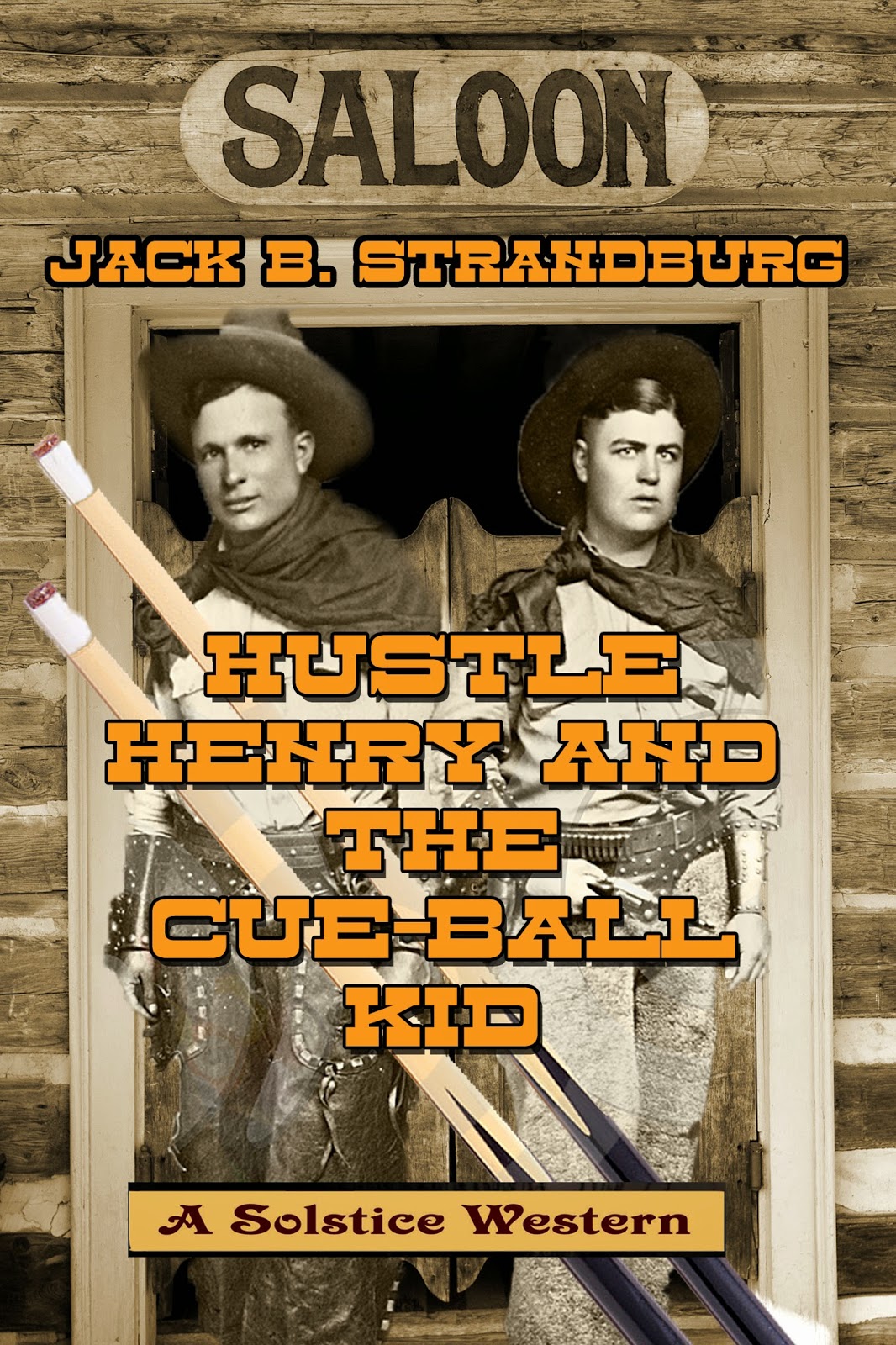 It's that time again this week, while preparing for our table at Anime Detour this weekend, I've got another character interview for everyone to read.  This time, it's for a western by Jack B. Strandburg.

If you'd like one of your characters interviewed, send me an email!


Clarence Flannery from Hustle Henry and the Cue-Ball Kid

Tell me a little about yourself and the world you live in.
I live in the Old West, circa early 1900’s. I was born and raised on a farm in Kansas and fell in love with the game of pool (billiards for you more sophisticated folks). My father wanted me to be a farmer but it wasn’t to my liking so I set out on my own to make a living as a pool hustler.

Tell us your most closely guarded secret?
Despite my obsession to beat every pool shark in the world and become rich in the process, I sure wish I could find a decent woman.

Tell us about your single most important memory.  What was it and how does it affect you now?
I would say without a doubt my sixteenth birthday when my father presented me with a cue stick made out of elephant ivory. It was a welcome gift to replace the gnarled tree branches and was a clear sign I was destined for billiard greatness.

A close second was a not so welcome event when I learned one of the Hole-in-the-Table-Bunch members who ditched me bought my parent’s farmhouse in Kansas.

What type of person are you?  Are you a hero or do you shy away from conflict?
While gunfighters and violence in the Old West were the norm, I never shot anyone and never carried a gun. I avoid conflict at all costs, not always easy when taking money off my victims at the pool table. Many might see me as a coward but I prefer wise.

Do you have any hobbies, any special talents?
At an early age I became proficient at playing pool and that became my obsession.

And in that line, what would be your ideal day?
Watching men who believed they could beat me in a pool match walk away with their heads hanging lower than whale shit.

Do you have anyone close to you, any family or friends of interest?
James Skinner, aka the Cue-Ball Kid is the closest friend I have, although more often than not he and I didn’t see eye to eye so “friend” might be too strong of a word. However, next to me he was the best pool player in the world. He was my sidekick and traveled around with me and other members of the gang (The Hole-in-the-Table-Bunch). I must admit (a little reluctantly) had it not been for his help I might not have been as successful, although I can’t guarantee that.

What is your most prized possession?
That’s an easy question to answer – my pool cue, silly!

What initially spurred your actions in this story.  Obviously it had to start somewhere for you, give us an idea of where that starting point is and where it all started.
My father, a pool hustler of note in his younger days, introduced me to the game of pool when I was eight years old although I think he later regretted his decision since I turned down his offer to inherit the farm. I was a born pool hustler and found it an easy way to make money. It sure beat robbing trains and banks and risk getting shot or thrown in jail.

How do you envision your future?
I would be happy to continue hustling pool for the rest of my life, although I might seriously consider dumping the Cue-Ball Kid. After a while he became too high-maintenance, nothing more than dead weight. In retrospect I should have set out on my own. I would have felt the same way about the rest of the Hole-in-the-Table-Bunch but some got scared off after we ourselves got hustled and a few of them actually turned against me.

Tell us where we can read more about you?
Hustle Henry and the Cue-Ball Kid

Author: Jack B. Strandburg
You can buy the book here!

Posted by SnowTigra at 6:38 AM