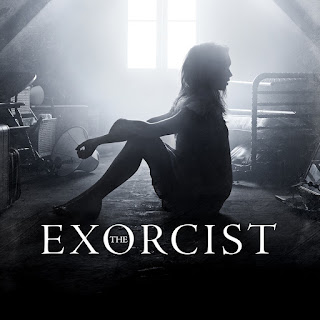 We all know the infamous movie, about a young possessed girl and the two exorcists who tried to dispel the demon inside her.  This isn't quite the same story, but it's very similar.

Back when I was in high school, a friend and I decided to buy a bunch of old VHS tapes from a local garage sale.  While this is not one of those horror stories, one of those tapes happened to be The Exorcist and we decided to pop it in and watch it, without really knowing what we were getting into.  At the time I was NOT PREPARED for that movie and it's stuck with me since then.

Now, well out of high school and into my 30's, the potential of a TV series around the same story sounded to me like a great idea.  That and by now you probably know I'm a huge sucker for anything that deals with any religion in a respectful and creative manner.

The nice thing about this series is that since they had so many episodes, they were able to stretch things out and give plenty of twists and turns.  We got to see each of the characters fleshed out and it becomes really easy to care about each of them and want to see them beat the demons present around them. While the series is called The Exorcist, the two exorcists are not the main characters.  Angela and her family are just as important and it gives the series a real weight to it that I wasn't expecting (as most tv shows tend to fail, at least a little, in this area).

The demons - yes, plural - are also handled amazingly well.  Rather then shadowy CGI effects or something equally cheesy, this series has grasped the recent trend of making them look human, with one slightly off characteristic.  It makes for a much more suspenseful story (because they could be anyone) without the need for a lot of budget being dropped into cheesy effects.  It also reminds me of one of my favorite book series: Morgan Kingsley by Jenna Black.  In that series she's an exorcist by trade who ends up with a demon prince inside her.  While that doesn't happen here, the way the demons are treated in regard to their intelligence, society and interaction with the human race is very similar.

The religion aspect is also handled nicely.  One would think that a series about exorcists and exorcisms might be nothing but that and a bunch of heavy handed Catholic imagry.  Happily this series treats the church as a set piece that figures into the plot rather then soemthing that needs to be shoved down the audience's throat.  Several times thoughout the series there are chances to over show this element and almost every time the series steps away from that and almost takes a Supernatural approach.  In that they assume the audience knows what an exorcism is, so they don't need to teach us.  This is very welcome, as sequences like that could have easily turned me off to the show or made me bored.

Now with all those good things, there is one glaring bad thing that I noticed and it's a teenie bit spoilery, but I'll do my best to keep it vague.  Many times throughout the series, as much as I liked the two priests, I found them acting very stupid in putting some of the larger pieces together.  A fairly obvious plot point was missed by them for about 2/3rds of the movie to the point that it was quite annoying.

Best season so far.  I can't wait to see the next.

Streaming on Netflix, which is why I'm a season behind.  I have to wait for it to come to Netflix each time.