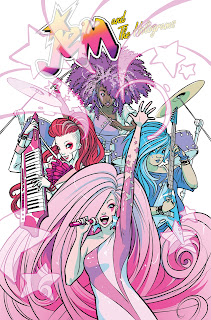 Jerrica and her three sisters have dreamed of singing as a band for years, but those dreams were derailed when their father died.  About a year later they have the chance to make the impossible happen - become a real band with a contract!  They just have to participate in a Band Battle competition against the Misfits and win.  The problem is Jerrica has horrible stage fright and everything seems to be stacking up against them.  Luckily Jerrica just so happened to find a gift her father had left behind, which might just be the key to everything they've ever wanted.

Once upon a time, back in the 80's, I was obsessed with cartoons.  Not much has changed now, really, but back then I basically refused to watch live action, because animation to me was so much more interesting.  One of those shows that I absolutely loved was Jem and the Holograms and like most cartoons back then, it was painfully and beautifully 80's. 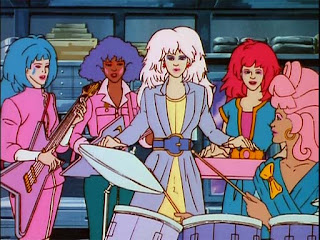 Even with that, it was a great show.  I loved the idea of being one person and being able to transform and still being an awesome person that so many people could depend on.  Now that I think about it, I would bet that this show created the basis for my absolute love of the magical girl genre, because that's exactly what it was.

Let me say this, this comic series is exactly what reboots should be.  As much as the word makes people cringe and run away in fear, holy crap this is good.  It's the same basic story, readjusted to fit current teens and it still works.  Unlike a certain movie that bombed fantastically, this comic hits all the right cords and still manages to be a great story.

The girls are fleshed out, given great personalities and backgrounds.  They're all shapes and sizes and their clothing and hair styles change as much as you would expect in real life.  Add to that some amazing writing and I was pulled in instantly, remembering the show I grew up loving and yet still seeing this as a separate thing that stands on its own. Plus, the ability to now have lesbian characters be open lesbians will win me forever!

I especially love the song pages and how it's a montage of images with the lyrics swirling around, it's just so artistically done and manages to convey the feeling of music even though they're static images on the pages.

I finished the first collected edition in one sitting and need the second novel, basically, yesterday.  Plus, the cosplay need is so great.  Can you tell I like this series?

Purchased the collected edition from The Source and plan to get the others as well. And hopefully you'll see cosplay from this in the future. 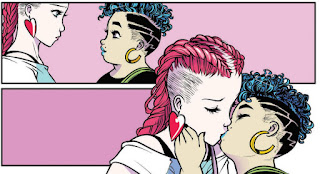 Posted by SnowTigra at 4:53 AM