A special Character Days for this monday, with a very unique guest ^__^

Book(s) name: The Hall of Doors series (The Mountains of the Moon, The Door in the Sky, The Mirror Door, The Secret Door, The Water Door …and more to come)

Most of my early life was spent in what you consider the “real” world. As a kitten, I went to live with my first girl, Elizabeth, or Liz. She was only ten, old for a cat but quite young for a human. We lived in a small town in the United States, in a big two-story house with Elizabeth’s family. The family was kind and loving, and generally treated me with the respect due a superior species.

My mother had told me about visiting another world, by way of a magic gate that would sometimes appear when the moon was full. So I began to “climb the moonbeam” to visit Selena in her fairy castle, but I always came home to Elizabeth. Eventually Elizabeth grew up, married, and had a kitten-- I mean daughter—of her own. Her mate didn’t stick around long, so Elizabeth, Samantha Jane, and I all moved back into the old family house, and I continued to divide my time between my human girls and my fairy friend, Selena.

Selena lives in a big castle, which her father built around a collection of magical gateways that connect to many different worlds. Starting from  the “Hall of Doors” and then making connections at various world gates, you can travel to almost anywhere in the fairy universe. As a roving troubleshooter for Selena, I’ve done a lot of traveling.

My human family in the “real” world doesn’t know I can understand every word they say, and can talk as well as they can. For some reason, they can only understand what I’m saying when we’re in the fairy worlds. That’s their problem, not mine. Oh, and maybe I shouldn’t even admit this, but I actually like most dogs. Don’t tell anyone that, please. It would damage my reputation with other cats.

Oh, dear. I wouldn’t want to give away the ending of my first story. Let’s just say that Samantha Jane had to make a very difficult decision, one that affected my life as well as hers, and I was proud of what she did, even though it was hard for both of us.

Selena, that’s Princess Selena, actually, has sent me on many diplomatic missions, for the purpose of maintaining peace between her allies while her father, King Argent, is away leading the war against The Dark. In my experience, heroics are rarely called for, and are usually the result of poor planning or lack of control. I prefer talking things out to fighting, but generally I feel I can handle just about anything. I am a cat, after all.
Do you have any hobbies, any special talents?

I don’t know that you’d call them special talents as opposed to just normal cat qualities. I can see the magic gates, which are hidden to humans and many other lesser creatures. I see what’s really there instead of being deceived by illusions, and I never get lost. I’m a skilled negotiator, and can deal calmly with dragons, manic pixies, and carnivorous flowers as well as quarrelsome humans and fairies. Hobbies? Well, I sometimes feel kittenish and like chasing a ball.

My ideal day would consist of eating plenty of fish with a little cream on the side, and spending a lot of time napping in the sunshine.  Maybe a little ball chasing or playing with feather toys, if I felt like exerting myself. Actually, any day that doesn’t involve dangerous adventures, negotiating truces, or traveling by water sounds like a good day to me. Because Selena depends on me so heavily, I don’t get a lot of ideal days.

For humans, there’s Samantha, of course—she prefers to be called Sammy. I like her friend, Kerri, also. Princess Selena is my closest friend amongst the fairies. Aeryk and Dorlyn, the shape-shifting elf-unicorns, are nice but I don’t see them often. My many-times-great granddaughter, Peaches, has come to live with Sammy; she still has some growing up to do, but she’s becoming a feline to be proud of. She’s quite attractive also, cream-colored with a large brown patch on her back that makes her look like a perfect fresh-baked biscuit, just like me. That’s how I got my name, by the way. The “princess” part is in recognition of my proper, regal attitude.

Cats aren’t as materialistic as you humans. I don’t really “own” anything, but humans and fairies seem more than happy to provide me with whatever I need or desire at the moment. Why bother with possessions when the universe is full of willing servants?

Well, you’d have to ask my author about that. I believe it all began when a young granddaughter, having been asked what she wanted in her next birthday gift story, responded “Write about a little girl like me, whose parents split up and her cat died.” The author decided to comfort her granddaughter by changing the story—she couldn’t do much about the absent father, but what if the cat didn’t die, but just went off to some magical place? What if the cat climbed a moonbeam and went walking on the “mountains of the moon?” Not the “real” moon, of course, but a special, magical place.  Within the story, it begins with Sammy being curious, and working out a way to follow me.

I expect to keep having adventures with Sammy. She’s a remarkable girl, brave, clever, determined, and willing to learn. She’s even learning to “think like a cat.” I’m very proud of her.

I’m in all of the Hall of Doors books; not all are available as yet.

Author: Janice Clark
Buy link: http://www.amazon.com/Hall-Doors-Janice-Clark-ebook/dp/B00J86RBXQ/ref=tmm_kin_swatch_0?_encoding=UTF8&sr=1-3&qid=1396048056 for the first three books in a combo edition, both print and ebook
Book cover /Picture of the character 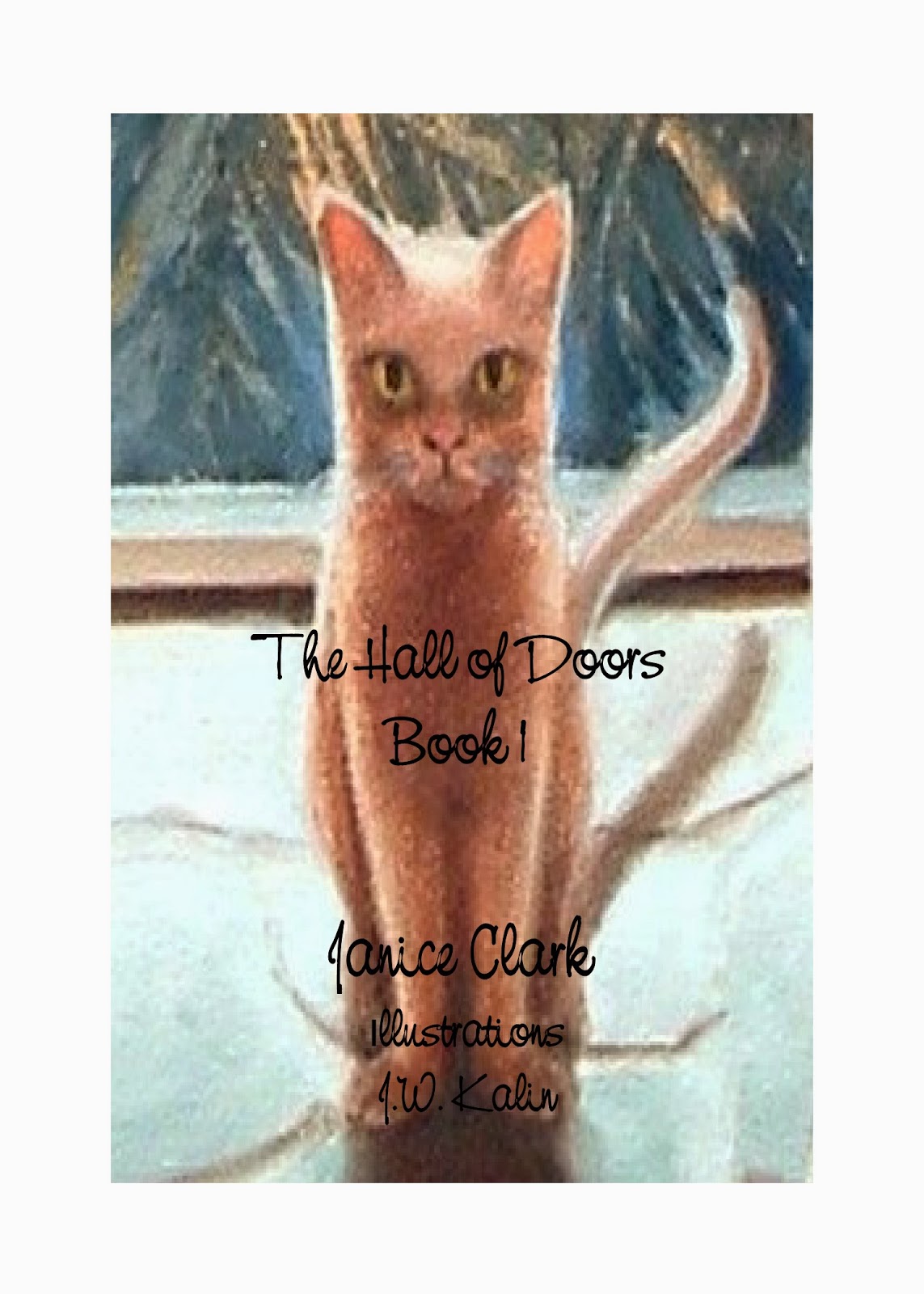 Here I am on the book cover; the shadows make my fur look darker.

The Hall of Doors series was originally conceived as an “early reader” collection, with a black-and-white interior illustration for each chapter making it a transition stage from picture book to chapter book. Three books were released as individual paperbacks. After the original publisher went out of business, Solstice Publishing picked up the series.  As one of their editors pointed out, the books are not only suitable for young readers, but for older readers who need something simple to read without being babyish. A three-in-one combo of the three previously published books has been released in both print and ebook formats. The wonderful illustrations by artist J.W. Kalin have been retained, with the original cover art migrating to the inside.  Publication is pending for two more books, and the author is thinking about more.

In The Mountains of the Moon, Sammy’s worried. Her cat has disappeared again. No one knows where Princess Buttermilk Biscuit goes on full-moon nights. Will she come back this time?
When Sammy follows her cat up a moonbeam to a world of mist and moonlight, she meets Selena, who lives in a beautiful fairy-tale castle. Sammy is fascinated by the Hall of Doors with its magical portals to other worlds. But the dreamlike adventure turns into a nightmare when Sammy is faced with the hardest decision of her life. Will she have the courage to make the right choice?

In The Door in the Sky, Sammy learns that love and friendship are stronger than fear, as she and Selena take a dragon ride and open a perilous spellbound treasure box.

The Mirror Door leads Sammy to one challenge after another, including fire-spitting jabberwocks, carniverous “humpties,” and an aggressive dandelion. Can she solve the mystery that threatens to start a war? Most important of all, can she keep her temper?

Sammy feels as though her world has caved in when her mom has to move to another city to get work.  She grasps what may be her last chance to introduce her friend Kerri to Selena’s world, and the two are off on an exciting adventure to rescue BB and group of homeless refugees.  Their allies include shape-shifting elves who can turn into unicorns, and dragon-hunting, nomadic kizzees, who look a little like koalas.  Both the kizzees and the unicorns are exiles from Princess Selena’s home world, displaced by The Dark, and parties to an age-old feud, which complicates matters a little.

Also: in The Water Door  Sammy, her friend Kerri, little cousin Maggie and the cats cross the Sea of Storms to a distant island, where a family quarrel is about to erupt into a war. A young water dragon comes to the rescue when their trip is interrupted by a storm. Once they make it to the island, little Maggie is the hero of the day when she rescues a fairy child, assisted by helpful bees and a friendly python. (Illustration are in progress.)
Posted by SnowTigra at 3:21 PM