Two character days this week!  So, without further delay, here's the second!

William Orwell Steele from May Day 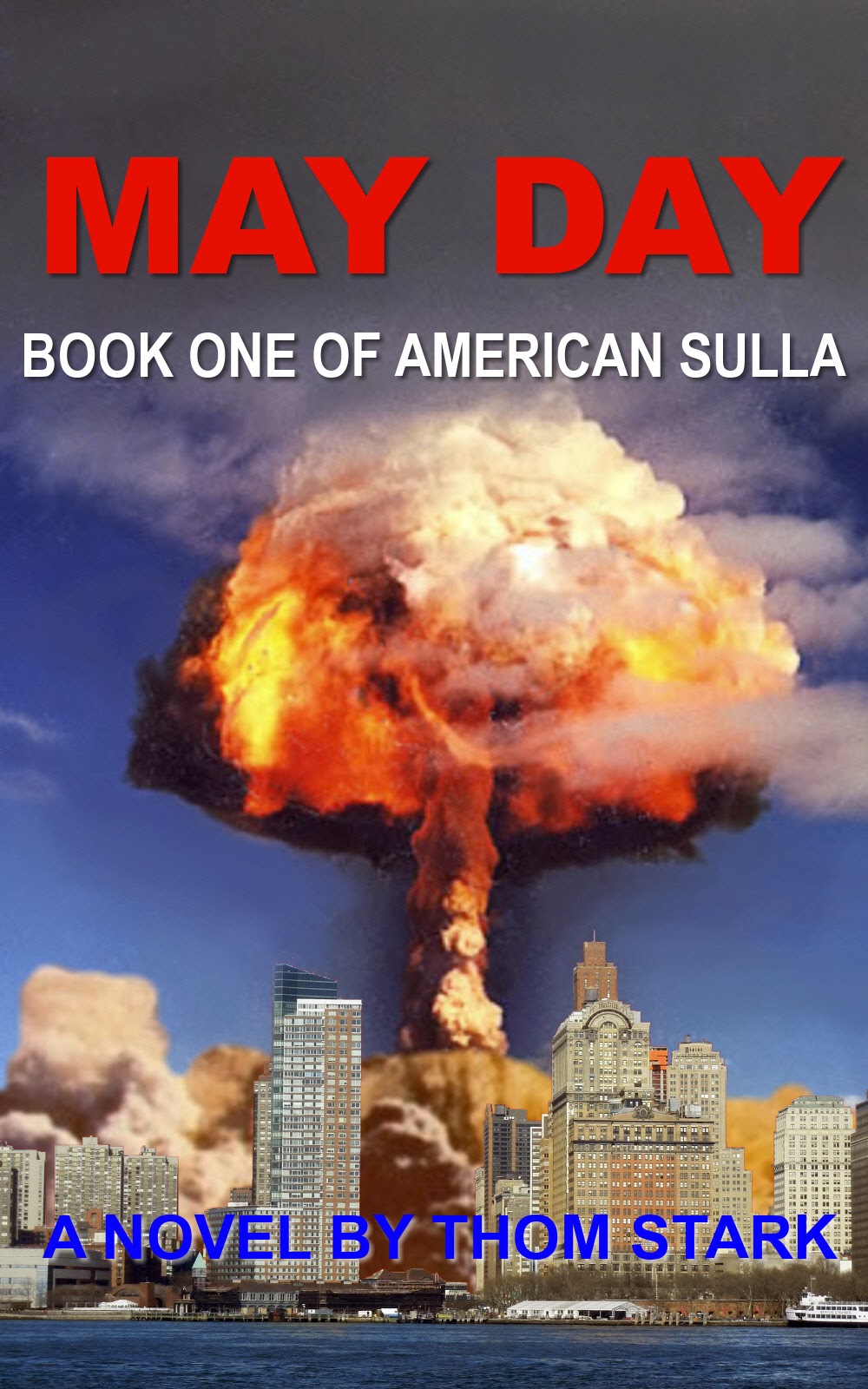 Tell me a little about yourself and the world you live in.  (If the character and story is our world, tell me about the neighborhood or city, town, country etc)
Well, I think everyone knows I have the high honor and distinct privilege to be the 45th President of the United States. I live in Washington, DC, of course. Our nation’s capitol is a world apart from ordinary Americans’ lives. It’s a kind of hothouse environment all its own. I think that’s unfortunate in a very real way, because we who live and work inside the Beltway tend not to be as aware of how our decisions truly affect the way our constituents live as we really should be. I’ve tried hard to change that, but you’d be surprised at how little power the President actually wields on a day-to-day basis.
Of course that’s all changed since I was forced to declare martial law, following the May Day attack.

Tell us your most closely guarded secret?
I’m afraid there’s quite a number of closely-guarded secrets I’m not at liberty to reveal. I suppose, though, it’s fair to say most people would be surprised to learn how often I question whether I have the wisdom I’ll need to guide our nation through these, its darkest days, and the strength to keep making the hard decisions that only the President can make. But that’s what the job requires, and I accepted this burden when I took the oath of office.

Tell us about your single most important memory.  What was it and how does it affect you now?
Oh, God. It’s that afternoon in Cleveland, when my wife Julia died in my arms, struck down by an assassin’s bullet meant for me. It’s going on four years since it happened, and it’s as clear to me and as terrible now as it was on September 7, 2016. I think of it every day …
I apologize. Could I have a moment to compose myself before we continue?

Let me just say that I embarked on a political career with the hope that I could make a positive difference in the course this country is charting towards the future … and in the lives of ordinary Americans. Those goals have been much harder to achieve than I ever imagined, but I’ve tried my best to keep them in mind, even when the administrative responsibilities of the position pile up to the point that they block the view.
As the old saying goes, “Sometimes it’s hard to remember you started out to drain the swamp, when you’re up to your hips in alligators!”

Do you have any hobbies, any special talents?
Being Chief Executive leaves me very little time for hobbies, I’m afraid. I do try to spend at least a little time every day with my Great Dane, Duke. As for talents and interests, as you probably know, my degrees are in history and political science, and I think a knowledge of both of those subjects has stood me in good stead as President. My study of world history, in particular, is often helpful. Saroyan observed, “Those who forget the lessons of history are condemned to repeat them,” and I think there’s some truth in that.

And in that line, what would be your ideal day?
I remember a particular Saturday at Camp David a couple of years ago. It was in early October, as I recall. The leaves were turning, the weather was beautiful, and Duke and I spent a couple of hours just hiking and enjoying each other’s company. It was only the two of us – and my Secret Service detail, naturally – and, for a while at least, I was able to forget the demands of the Presidency and enjoy a simple walk in the country.
Given the current situation, I don’t expect another such experience any time soon, so I treasure that one all the more.

Do you have anyone close to you, any family or friends of interest?
Well, there’s Andy Philips, my college roommate, who’s now White House Chief of Staff. We talk almost every evening – although our conversations these days are more a continuation of the workday than they used to be. And Marcus Clement, my personal physician has been a friend for more years than I care to count.

As for family, my parents are both dead, and my daughter Artemis is in graduate school at Berkeley, so we rarely see one another any more. And Julia’s parents … well, I think seeing me is just too painful for them, for obvious reasons. I still care about them, though. We exchange Christmas and birthday cards.

What is your most prized possession?
My daughter Artemis – that is, if a child who’s 23 years old, and an adult in her own right can be referred to as a possession. It’s no secret that relations between us have been … strained … since her mother’s murder. I know she blames me for that. Truth to tell, I sometimes blame myself. I can’t help but think that, if I’d chosen to stay in Colorado and run for another term as Governor, Julia would probably still be alive. But, of course, the past is fixed. All we can do is try to remember its lessons, as we look to the future.

What initially spurred your actions in this story.  Obviously it had to start somewhere for you, give us an idea of where that starting point is and where it all started.
The nuclear terrorist attack on Lower Manhattan at noon on May 1st, 2020 changed my life as much as it changed every other American’s – possibly more. I was in the middle of a speech to the Commonwealth Club in San Francisco when the head of my Secret Service detail gave me the news. Up until then, I’d been focused on my upcoming re-election campaign, and on the upcoming summit meeting I had scheduled with Vladimir Kropotkin, the President of the Russian Federation. That all changed in a single heartbeat. On the advice of Arleigh Solomon, my National Security Adviser, and the Joint Chiefs of Staff, I declared martial law on my way back to Washington, and it’s been very like the world’s worst roller-coaster ride ever since.

How do you envision your future?
Frankly, at the moment, I’m too focused on trying to salvage this country’s future to worry about my own. If the people of the United States re-elect me as President this fall, I’ll do everything in my power to justify their faith in me, but, right now, I just can’t be concerned about that. With the ongoing effort to rescue as many Americans from the Fallout Zone as possible, with the economy in shambles, with terror and hate groups coming out of the woodwork, and with the ongoing work of finding and bringing to justice the perpetrators of the May Day attack, I have neither the time nor the energy to worry about what the future holds for me, personally.

Tell us where we can read more about you?
May Day – Book One of American Sulla begins with the detonation of a 20-kiloton nuclear weapon on the 63rd floor of 1 World Trade Center. A million people die. Millions more flee from a gigantic, deadly cloud of fallout.

The crisis has only begun.

President William Orwell Steele and his cabinet labor to cope with the aftermath of an unprecedented terrorist attack, while a host of ordinary Americans struggle merely to survive in a world where everything has changed. From the corridors of power to the squalor of refugee camps, from world capitols to the lawless frontiers of Pakistan, from economic collapse to armed rebellion, the impact of the May Day attack swiftly spreads to every aspect of society and every corner of the globe..

War – Book Two of American Sulla chronicles the following six months, as President Steele battles militia uprisings, a hopelessly-partisan, deadlocked Congress, and a collapsing world economy, while the military prepares for war with Pakistan. As the Presidential election looms ever closer, so does Steele’s world-shaking October surprise.

Revolution – Book Three of American Sulla takes us to the end of Steele’s second term as President, and the cascade of terrible and unexpected consequences of his daughter’s return to her father’s arms.

Author: Thom Stark has been a professional writer – which he defines as “one who gets paid for it” – since 1995, when his @internet column began appearing in the pages of LAN Times Magazine. He is probably best-known as a columnist and feature writer for the late, great Boardwatch Magazine. He maintains an archive of past columns and articles on his website at www.starkrealities.com.

Mr. Stark currently lives in Chillicothe, Ohio, with his wife Judy and their lovable mutts Wally and Watson, where he is hard at work on War – Book Two of American Sulla.

American Sulla is a big, big novel (May Day alone is more than 147,000 words long). As you might expect, it has a gigantic cast, and William Orwell Steele’s is only one of many stories that make up the narrative. In addition to the political thriller component, the plot includes survival adventures, police procedurals, spy stories, tales of aerial, ground, and sea combat, and romances, inspiring heroes, the blackest of villains, and a host of ordinary people, simply trying to survive. It will keep you on the edge of your chair, make you think, break your heart, and capture you like no other novel you’ve encountered.
Posted by SnowTigra at 5:10 AM