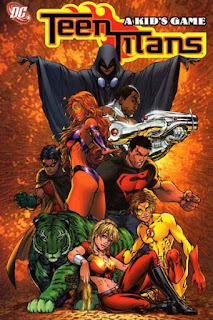 What's it about?
The Teen Titans are back, the team reforming with the newest 'sidekicks' of the DC Universe, in the aims of giving them a place to be kids and learn to be themselves without the Justice League looking over their shoulders.  But this isn't the first group of Titans and the team's past comes back to haunt the new members, forcing them to stand up and fight as the team they hope to become.

Review
I have always been a fan of the DC Universe of comics, with a special love for Batman and Robin.  I also love the cartoon show for Teen Titans, enjoying the origin stories of teenagers coming of age as heroes and the pitfalls that come with it.  While this comic has, essentially, a completely new set of heroes and takes place in the DC universe after that show, it still does a good job of hitting the same notes I loved.  These characters aren't perfect heroes and I love the tension that many of them might become something else.  The climax of the book seemed a bit rushed, but it would have been amazing as an animated show where the action wouldn't be limited to about three pages.  All that said, I couldn't put this down.  I do hope, with all the DC animated movies doing so well, that they delve into the world of the Teen Titans once or twice.  Seeing these characters in a grittier and longer animated movie would be awesome and very welcome.


(Disclaimer: This book was purchased at Half Price books with my own money, no money was received for this review.)
Posted by SnowTigra at 3:52 AM