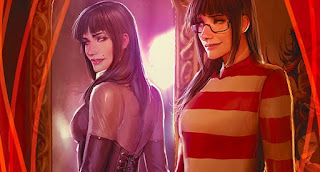 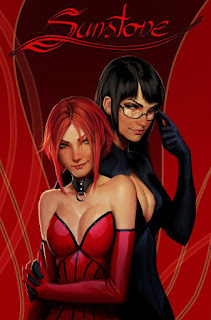 
Lisa is a freelance writer, more then often dabbling in erotica when she can and mostly keeps her submissive side hidden.  Meanwhile Ally is a successful business woman with more then enough money to burn - and burn it she does on elaborate props and setups for the perfect submissive she's hoping to one day finds. The comic follows their meeting and relationship together as they explore their own preferred taboos and figure how to blend their worlds of 'love' and 'submissive and dominant' together. There's also spin off series concerning the others characters introduced, such as Sunstone: Mercy and Sunstone: Jasper.


As I mentioned, if you were looking for a healthy alternative to the more well known '50 Shades' relationship, here is a perfect example.  The series was recommended to me by a good friend and it does not disappoint in story, heat meter or art.  Basically, we have a healthy relationship here that is arguably better then the damaging fantasy of the previously mentioned Gray series.

Backing up a bit, ever since my teens I've had a love for art in this style.  It can hardly be called pornographic, because it's not just about the boobs and flesh shown off, though there is plenty of that. Growing up I found myself drawn to the art of Luis Royo which easily mixed sexuality and art, and now I have a deep love for doujinshi and fanart that do the same thing. Basically this is a story that doesn't shy away from showing skin when the plot requires it, but does so in a tasteful way that can easily still be called art.

If you're not familiar with the kinky world of the characters, that's not a problem.  The comic obviously understands that the world is full of a variety of people with a variety of experience and kinks so it gives enough information for a foundation without shaming the reader in anyway.  It's easy to get into and easy to love the characters - especially when they refer to themselves as sexual nerds, who just happen to like sex the way most others would describe their love of comics or movies. It's descriptions like this that make the world and story especially easy to step into and explore across the pages. 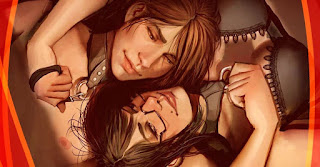 
Having read a variety of books, novels and comics before, I would have to say the main thing that grabs me and keeps a hold of me about this series is how much history the characters seem to ooze with each action.  This isn't just the normal author goal of creating 3 dimensional characters, no I would venture to say the creators of this series have gone beyond that with their writing, illustration and even the perfect little details of how Lisa bites the side of her lower lip.  It feels like I've met these characters.  With each new volume and page it feels like I'm checking in with close friends and hearing about their lives. The storytelling is personal and vivid in a way that few stories manage to be. 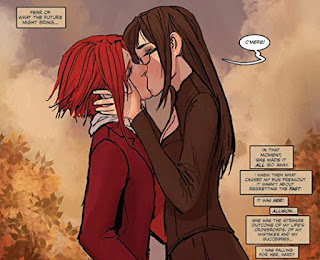 It's really common in our world to just pair men and women together if they share a certain amount of screen time. It's quite rare for media - especially certain movies - to show us the depths of a relationship and how it grows, twists, turns and flourishes over time. This is even more rare when talking about queer couples or couples with niche sexual interests.  First and foremost this series communicates that sexuality is a spectrum of desires and needs - with every person having needs they not only struggle to understand, but also have to find another who can meet them.

Where can I find it?


The collected volumes can be found at most local comic stores and are published by Image and Top Cow. Support your local comic book store!

You can also find them on Amazon.

You can also check out the creator's Deviantart page.
Posted by SnowTigra at 1:13 PM