The Default is NOT White

I am sick.  I am tired.  And most of all, I am disappointed.

As I've grown and gotten more into the geek world, fandom as a whole and just more of humanity, time and time again this issue has come up.  Every time someone who is not white takes a chance and steps forward, dressing as a character where their skin color is just the slightest amount off, the internet explodes.  Countless times my wife has dressed as a 'white' character and she's been called names because she is in fact black.  Countless times strangers and friends across the internet have done this and have been called names, the N-word and trolled, and it's pathetic.

This came to a head today because one of my wife's close friends dressed as Lola from Space Jam, - who is in fact a brown bunny -  and was bashed because she herself is black, and how dare she turn a character black. 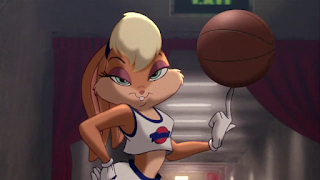 But see, there's the problem.  A bunny, people?  Seriously?  It's a rabbit.  It's a drawn rabbit who is animated with light brown fur.  This character is not black.  She is not white.  She IS A RABBIT.

One doesn't need to look far in the world to see this issue.  The flame wars surrounding Rue when the Hunger Games movie came out.  The 'underground' fandom that believes Hermione is actually dark skinned.  Heck, there was even an explosion when one of the new leads in the upcoming Star Wars trilogy was revealed to be a black Storm Trooper.

This is the problem!  We - as a world - need to stop assuming that just because something isn't identified as some other color in the first millisecond, that it's white.  This is not a small problem, this is a huge one.  People assume that anime characters are white, because they're drawn without black hair and stereo-typically tilted eyes.  People assume that characters in books are white because they glossed over the word 'olive' as a skin color, or heck, didn't even realize that the description wasn't there. This happens every day and it's so painfully obvious that it really needs to stop now.

And it's not just people who are white who make these assumptions, it happens on the other side too. During a panel this year, my wife admitted to myself and quite a few convention goers that she's done it herself.  When we were in the brainstorming stages of our Storyteller novel series, I mentioned that we should make a couple of the characters black and she just stared at me.  Not because it was a horrible idea, but because that idea had never really occurred to her before I'd mentioned it.

It is a sad and sorry statement against the state of our world, when we are so trained to see everything as white.  Everything is white until proven black and even when the proof is there, too many people gloss over it or don't see it so that it become moot. It puts our world in a very monochrome lens, when it's anything but, and it comes out in everything that we make from movies, to fanfiction, to art, to cosplay, creating a self fulfilling prophesy of whiteness and the horrible hated other.

People aren't allowed to express any sort of color anymore without hatred thrown at them.  People aren't allowed to dress as their favorite characters, write about people like them, or even imagine that just maybe, just maybe that character is something else.  Yes, I'm looking at you Annie, Fantastic Four, Spiderman and even the new Incredible Hulk.

It is a sad, sorry state of affairs because of what we're depriving the world of.  This world is full of so many colors, why would we do this to ourselves?  Beyond an issue of race, beyond an issue of being a bigot - seriously?  Look at what the world is denying itself by ignoring and denying and automatically hating the huge array of variety out there.

There's an image I saw on Facebook, as a meme of all things, but it sums this up so perfectly and I wish I still had it saved.  The picture showed a group of brightly colored birds and talked about how we loved their variety, but hated our own.  Then it showed a picture of a group of children of many different races.

I am sick, tired and disappointed. I am also frustrated.  I am a white woman, so you may think that I don't have a personal stake in this, but I do.  Beyond my wife who is black, beyond my friends and the people I've met in the world and the unwarranted hate they receive, I live here too.  I see the media and the fanart and ads and everything around me and the amount of white that I see is so overwhelming that it hurts.  I DON'T HATE WHITE, but I would like to see some variety.  I would like to see the variety of the amazing people I've met and know reflected in the things I enjoy.  I would like to be able to step into other worlds of fandom and fun and be presented with the amazing array of color and variety that I already know exists.  I shouldn't have to dig for it.  It's already around me, so why is it so hard and hateful to find?  And really, if I'm this frustrated, I can only image how frustrating and painful it is for people who are not white.  I have been told how painful this is.

Posted by SnowTigra at 5:14 PM