Castle Rock - A Twist on the Expanded Universe 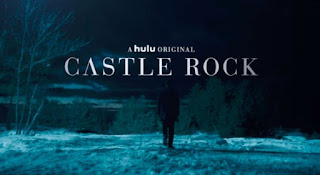 Upfront I'll admit, I love expanded universes.  Comics, manga (Japanese comic books), movies, novels, fairy tales, all of it.  I love when you can pick up a story and realize there are these threads that spread out to other stories. I am completely caught by an expanding narrative that allows me to catch all the small threads, as if I were catching the tail end of a very long inside joke. It keeps my little geek heart happy.

Some do it better then others.  The early days of the MCU with little teasers at the end were cute, but nothing compared to the layered worlds of  CLAMP manga. The difference being that one was a set up from the beginning, while the latter was pieced together part by part, the connections added in with each new story. Now there are pluses and minuses for each, but my heart lies in the ones that aren't so obvious and don't use the intertwining as a crutch - looking at you MCU. 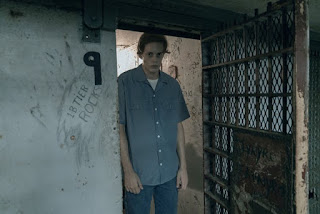 That paired with the fact that I am a Stephen King fan.  I grew up stealing his adult books from my mother's reading shelf in the spare bedroom, hanging on the retellings by my best friend when I wasn't brave enough to finish them myself.  I knew he always crafted his stories to connect and when I found CLAMP did the same thing in my college years, I'm reasonably sure it's part of the reason they were one of my favorite manga creators.

Flash forward to today, while working on other things I decided to press play on Castle Rock.  A new series by Hulu, Castle Rock bills itself as Stephen King told ala Once Upon a Time. In other words you may recognize the place, you may recognize the characters, but this is a new tale, and that really intrigued me. Because by now I've read even more of his books and seen quite a few of his movies.  Beyond that I admire him as a writer - though some of his tropes irk me - and dream of having a library of my own works as numerous as his one day. 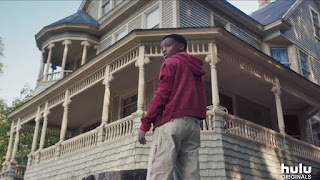 So what exactly is Castle Rock?  Well, for those
familiar, Castle Rock is the fictional town that a
good number of Stephen King's stories take place in.  It's situated in Maine and is a small town, complete with all the downsides of such a place - ie small town secrets, old notions and strange but protected ways. The townsfolk aren't evil, of course, they're just set in their ways and when something new comes up or something tries to rustle their way of life well, there's no having that.

As a series, Castle Rock weaves together a unique story with countless points of entry. For those who aren't familiar with Stephen King, you'll find here an intriguing story about the source of evil buried in a small town.  For those familiar with the author you'll find the same... and so much more. Littered throughout the storytelling are nods and hints to all of his books. Some are obvious - like the infamous Shawshank Prison - while others are ever so slight - the mention of a rabid dog that one year.  Hints abound, you can barely blink while watching, because you'll miss one. 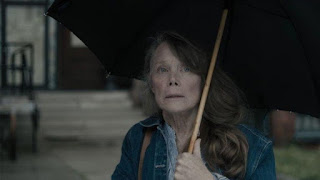 The nice thing is, even with these easter eggs scattered across the path, unless you're familiar you wouldn't know and it doesn't hurt the story if that's the case.  At the time of writing this, I've seen five episodes in the series and they all come together with a complete tale that doesn't leave the viewer out in the cold. At no point am I told 'oh, that's from Needful Things, read that for more' nor does a character subtly drop a list of the other movies you should add to your queue.  Nope, it's all an inside joke that isn't required to watch the show and enjoy it.

Honestly, I wish all expanded universes were like this and I do miss it. I realize that Marvel and DC have movies to sell and Once Upon a Time had fan favorites they wanted to show Disney fans front and center, but Castle Rock shows what can happen when those wishes aren't focused on.  And in the end this series is masterfully unfolding and I'm so ready to see where it goes.  Then, once it's done, I know I'll be revisiting other favorite movies and novels of Stephen Kings, to relive those worlds all over again and even try a few other new ones.
Posted by SnowTigra at 9:00 AM