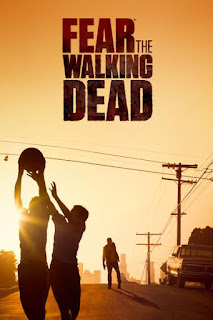 Right off the bat, if you're here on my blog you probably already know that I have a serious love for zombie related stories.  It's not so much the falling apart creatures that pique my interest, but rather what effect they have on the humans around them as they slowly (or quickly) take over.  That added to the fact that at this point I've seen about 5 seasons of The Walking Dead and I finally decided to give this one a shot.

Fear the Walking Dead is the prequel to the popular Walking Dead series, telling the story of the beginning of the zombie plague.  We join a whole new cast of characters on their journey to adjust and survive with the ever spreading virus.

If you notice, I haven't really done any reviews on The Walking Dead series, and likely that'll remain the case.  it's not that I don't like the series, but I honestly like it less then a lot of other things I've been watching and thanks to repedative storylines, characters being stupid and a lack of diversity it has become a background series for while I sew and feel the need to occassionally watch zombies.

In contrast, I've impressed with FTWD much more, and I'm not sure I can pin it down to any one factor, but I'll at least try to discuss a few.  Warning, spoilers may be a thing for the first season. 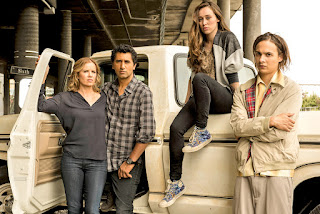 So the first thing that caught me on FTWD was the story.  I don't know about anyone else, but the part I love about zombies is people adjusting to it, and the original series missed that because when the main character woke up, the invasion and infection had already happened.  Here we don't have that, instead we have a mixed family that is already trying to navigate combining their children and households and drug addicted son tossed right into the middle of the outbreak.  Each deals with it in a different way and I love how the large extended family dynamic played into it with their different loyalties.  (Take note Walking Dead, THIS is what you can do with a diverse cast of characters from different cultures and backgrounds.  THIS IS WHAT YOU SHOULD BE DOING.)

The character of the son, Nick, and his addiction is the most interesting dynamic and I'm happy to see they didn't treat it as a single plot point throughout the show.  He's addicted to heroin and quite often we see him acting much like a zombie while he's high, or freaking out because he can't get to his next fix.  He creates a very interesting mirror to hold up to the outbreak and he himself knows it and states so in the show.  Nick isn't generally the type of character I would like and identify with, but the writers use him beautifully in the context.

I've already touched on the diverse cast, but it bears repeating.  Not only do we have the standard suburban house wife deals with the hoard troupe, but we're also presented with very specific pieces of immigrant culture, spanish culture, other languages, the moral pull between being a mother and a nurse, having to deal with your ex and his new family and a whole host of things.  I really feel that the front runners for this show heard the complaints about the Walking Dead's habit of only having one black character at a time (in Georgia?  REALLY?) and that when a new one comes in the older one is killed off and took it to heart.  I really do hope that this cast remains as interesting and diverse as it is, even when people start getting killed off.

I'm also a huge fan of how the zombies aren't such a big part of this show.  True to the state of a spreading infection, in the beginning they won't be as prevelant and they aren't.  Instead they're treated more as set pieces who complicate the characters lives.  This is perfect writing.  The threat is there and it's imminent, but people still have lives and their own feelings to deal with.  I especially love the mother, Madison, dealing with her home being turned into a make shift hospital in their little refugee camp and not being able to cope with that and her son's addiction.  It makes them all more human and gives me much more hope for this series then the other.

In conclusion?
I'm watching more as soon as I can get it!

Currently I'm watching the series on Hulu, but they only have season 1.  I'm keeping my eye out for season 2 and I'm sure I'll be watching it as soon as it's up. 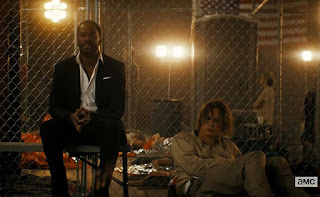 Posted by SnowTigra at 4:54 AM