The Bandwagon, and Why It No Longer Comes to This Stop 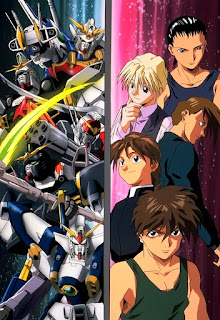 Back many years ago, when I was in college, I wrote fanfiction.  In the worlds of the internet, when it was still fairly new, I was part of a yahoo mailing list of authors who wrote about certain Gundam pilots getting together in romantic ways (wow, watch me date myself).  Back then I had a specific pairing I liked, but I was in the minority and there wasn't much of a fandom around that pairing.  So I made myself change.  I conformed and stepped aside, picking up the most popular pairing and made my stories match them.  Heero and Duo weren't my favorite, and they still aren't, but that was where the readers were and I wanted people to read my stories.  So I conformed and I got a lot of reviews and comments and author friends because of it.  My fanfiction got quite a bit of attention and I was happy.  I did my best to incorporate other characters in in other ways, but I conformed and mostly wrote about those two.

It wasn't horrible, but I'm well aware that I jumped on the bandwagon and rode it for reviews and popularity, happy to swap out characters when my muses really wanted to write about someone else just so I could get more readers and feedback.

Now, years later as a published author, I'm seeing it in a new light with regards to writing.  I see something like Twilight come out and suddenly there's vampires everywhere, sparkles and all.  I see 50 Shades of Grey and there's an uptick in erotica selling, no matter what the quality.  And I see movies like The Hunger Games and the explosion of young adult, dystopian fiction is so thick you could drown in it.  All of these have their good points and bad points, but the bandwagons are loaded up and ready to go, pausing at each stop to bring in more authors, stories and movies, until we as an audience are all so sick of them we swear them off and go look for something new.

In Hollywood, this is especially prevalent and even more noticeable.  It's not just a genre thing, instead it's boiled down to the very basics where it's assumed that movies (and media in general) will not sell unless it involves white leads in a heroic story.  Because white is the default right?  White is where all the money and culture and stories are, it's the easiest to identify with and forcing your story into the most palatable form for 'all audiences' is a bandwagon in itself.  (And I've addressed that specific rant before too.)

The problem is, as an author, that's boring and it's not why I'm here in front of my computer.  I'm not here to write cookie cutter stories that apply to the 'highest denominator' and I have no interest in telling another story similar to something already proven to be popular just to make money.  Even when I took up the most popular pairing in my fanfiction days, I still tried to give my stories a unique twist that made them stand out.  What I'm saying is I'm not willing to 'sell out' anymore just for reviews and just for money, in the end it leaves my work feeling empty and then I begin to wonder what was the point of writing it in the first place?

Don't get me wrong - some authors can do this.  Some authors can churn out bandwagon stories and make lots of money doing it, and all the power to them if that's what they enjoy.  But I'm not that author anymore.  And I would also like to make this argument that there's a very specific reason to not follow the bandwagon, no matter how popular it is.

Yes.  Writing about horror and non-binary characters and unhappy endings and other races won't get me the attention that writing about white, straight, happy ending adventures supposedly will, but as I'm writing this and putting my thoughts into words I'm realizing that I don't care.  I'm not in this to be rich, I'm in this to feed my muses and write the stories that I wish I could have found as a kid.  I'm here to fill in the gaps between those mainstream stories and offer another way of looking at things that hopefully, at least a couple people, will find they enjoy.  I'm here to write the stories that I worked so hard to find as a bookworm kid perusing the endless library shelves and still never finding  enough stories about someone like me who felt so different.

Does that sound self serving?  Do I sound self important?  Do I have grand dreams for something that isn't likely to happen?

But see, here's the thing.  The really really important thing: If I don't write that story, who will?

Back then, in the Gundam fanfiction days, the reason stories didn't exist about the pairing I liked was because people didn't write them.  And if they did, people didn't pay attention to them - including me.  I fell into the bandwagon trap and assumed that because it wasn't popular, it wasn't worth doing, because I wouldn't get the reviews and feedback I wanted and that I was convinced fanfiction lived on.  That is where I made a mistake in not acknowledging what I wanted and the space I could fill and it's the mistake I've consciously decided not to make again. 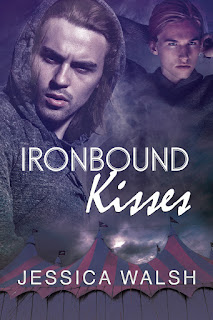 If I don't step forward and say I'm going to write about a gay romance between a not so nice fairy and the human who falls under his spell which touches on unhealthy relationships then who will?  It's not self important to think that my story, however odd, has an audience out there that just needs to find it.  Why?  Because I was that child who spent so many years of my life not realizing that I was searching for fantasy stories with magic where characters were allowed to be their gay selves and just exist.  I didn't have a name for it as a kid, but I do now.  So I'm writing in the hopes that I'll find that audience and give them what they want and what they may not realize they're searching for.

The part that is important and that people tend to forget - especially Hollywood it seems recently - is that between the ever stuffed bandwagon stops, there are little side streets full of people who are simply waiting at their own stops, wondering when the wagon they want will stop by.  Sure, they go about life and they may not speak up or they may yell - but they want something different.  And if everyone jumps on that bandwagon, they'll never get it.  They'll keep wondering where that story they like and they can relate to is.  I was that child and I remember how lonely those stops are when no one acknowledges they're there.

There are reasons behind the bandwagon, and there are cases where it's a good thing and it does give people what they need.  But there's an equally good argument (if not better) for that side street and out of the way stop they always seem to skip.  I firmly believe that everything has a place and every story has a mind to inspire and comfort.  So that's where you'll find me, writing away in my own little corner, selling to convention fans and typing away.

I also think you should try it some time.  Because the bandwagon isn't the only want to get around and sometimes a different view is world changing.
Posted by SnowTigra at 7:01 AM