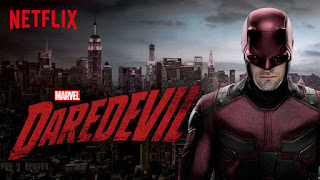 My history with comic book franchises centers mostly around the animated DC properties and the recently released string of Marvel movies.  So stepping into the Daredevil series, I knew bits and pieces of the character (from a failed Ben Affleck movie) and what I could glean from Wikipedia.  Knowing he was very similar to Batman in the almost lack of super powers and being the gritty crime fighter, I knew he'd be right up my alley.

And damn was I right.

This series is near perfect.  Atmosphere, well written characters and an overall tone that sucks you in almost instantly.  The lighting is used perfectly to simulate how dark the world is to the main character making the watcher almost blind, but it's done in an almost masterful way that you really don't feel like you're losing anything.  That and how they illustrate what he sees is so well done, you know exactly what his power is and you never lose sight of the fact that he's blind (ha ha) which is incredibly important to the show's premise and to representation as a whole.

And yes, while the series did have a few stumbles in representation (such as not having a hearing impaired audio track when it was first released) that has since been corrected and it comes as a great package.  I honestly see nothing horrible about the series and am eagerly anticipating the next installment of this and the other series Marvel has with Netflix.  If they are even half as good as this first presentation, I will be beyond happy.

I also want to take a moment to touch on the language of the show.  Not so much how the characters speak, but literally the languages.  Being a city full of colorful and interesting characters with a lot of power, this show isn't scared to have them speak in their own native languages and have the watcher read subtitles for a good portion.  They don't even take the cop-out of having the characters speak in their language for a bit then switch to English, assuming we know their still speaking another language.  Instead this show unabashedly has Russian, Spanish, Chinese and probably others as part of the normal landscape - and it adds to the show.  Yes, you have to read subtitles (which I know some people hate) but in leaving it all there naturally it adds to the authentic feeling of the show and it's even used as effective intimidation between some of the characters.  Its something we rarely see in shows and it comes as a welcome new piece.

I recognize that Marvel and Netflix are experimenting a lot with this series and the other Marvel ones to come.  From the harshly realistic fight scenes, to the audio canvas of the show, to the lighting and the well written characters.  Taking the whole package into account I love it, and I'm very eager to see how this show and the other upcoming ones play out.

Now for the fun part and looking a bit deeper at the well written characters.  There may be general spoilers below the picture, just a heads up. 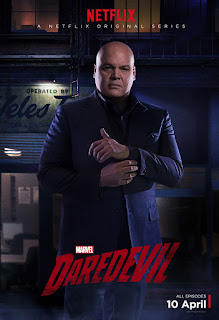 While all the characters are well written, the image of Wilson Fisk is the most striking.  I'm familiar with the Kingpin character from the Spiderman animated series of the 90's, and the Daredevil movie mentioned before.  In each of those he was a large and tall man, who spoke with authority and commanded the room around him.  This series introduces you to someone very different in Vincent D'onofrio.  His trademarked stuttering on words and stumbling over sentences from Law and Order is present and used masterfully to create a man who seems quiet and unsure of himself, but completely sure of his path and where he deserves to be, no matter what the cost.  All of this combined creates the sense that this character is a walking time bomb where the counter has stopped displaying.  You know he's going to explode, but you don't know when.  And you have no idea how big the wake zone will be.  It makes every scene with him nail-biting, because you're just waiting for the inevitable to occur in the worst way possible.  And when it does happen, you can't help but sit back from the screen to try and stay out of the range of his murderous rage.

As his story unfolded, I actually found myself rooting for him in a strange way.  No, I don't approve of his methods or the lengths he goes to, but I would have to be blind if I said I didn't see the similarities between him and Matt Murdock laid out so plainly to see.  I won't tell the details, but when Fisk's full backing for his actions was laid out, I felt for him.  He's the bad guy dammit, and I didn't want him to win, but damn was his character ever written well.  It's writing like this that will bring me back to this series and will always win me over.  It takes a lot to make me like a complete bastard of a man, and this show knew exactly what cords to hit.

If I ever wanted to point someone to such a perfect display of amazingly well written characters, Daredevil will now pop forefront in my mind.


All in all, like I said, I love the series.  I'm sorry it took me so long to watch it, but I don't regret watching it at all.  I can't wait for the next installment - Jessica Jones - when it comes out.  You got me Netflix and Marvel.  Now don't lose your stride, keep me here.  Please.
Posted by SnowTigra at 7:20 AM